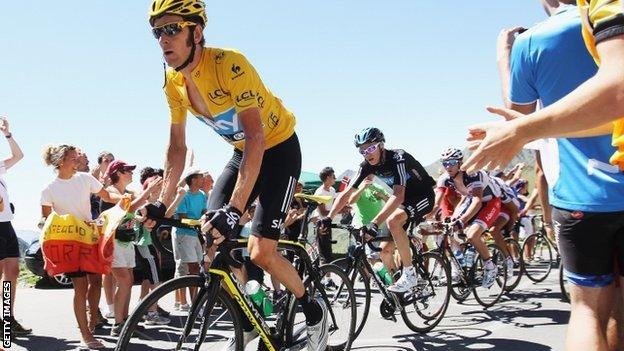 But Olympic time-trial winner Wiggins, 32, also said he would support whatever team strategy was ultimately agreed.

In July, Wiggins, supported by Froome,

Team Sky boss Dave Brailsford said in November that "the Tour of Italy would be a very good target for Bradley and leave Froomy then to focus on the Tour de France".

However he admitted that the plans were not

"My goal is to win the Tour next year. Whether that is realised or not, I don't know really," Wiggins added.

"How that's going to work with the team I don't know - it's more Dave's problem, really, to worry about.

Just when you thought Team Sky's plans for 2013 were sorted - Wiggins for the Giro, Froome for France - the main man chooses an interview on national radio to say 'erm…hold on a mo, are we sure?' This must mean Wiggins is training well, his competitive juices are flowing, and doubts linger over Froome's ability to captain a Tour challenge. The "co-leaders" approach calls to mind Hinault v LeMond in 1986, and Armstrong v Contador in 2009 - it will not be boring.

"It's just how we service both mouths - that's more the problem to figure out."

The 2013 Tour de France course would appear to favour Froome because the time trials in which Wiggins thrives have been reduced from 100km to 65km, with several tough ascents.

When the Tour route was announced in October, Wiggins said

Kenyan-born Froome finished second behind Wiggins in the 2012 Tour de France general classification and looked stronger on occasions in the mountains.

On stage 11 of the race, and later appeared

Mark Cavendish's ambitions to defend the green jersey - awarded to the race's best sprinter - with Team Sky in 2012 had to be sacrificed to help Wiggins's push for the more prestigious yellow.

The Manxman and Brailsford may have to juggle competing demands once again.

If Wiggins's unorthodox suggestion of having two team leaders was not adopted by Team Sky however, he is adamant that he would work to support Froome.

"Whatever the team strategy is, I'll support that, otherwise you don't take the start line because there will be someone else who is willing to fulfil that job," he added

"It's a case of doing what's asked of you on the day, whatever that decision is."