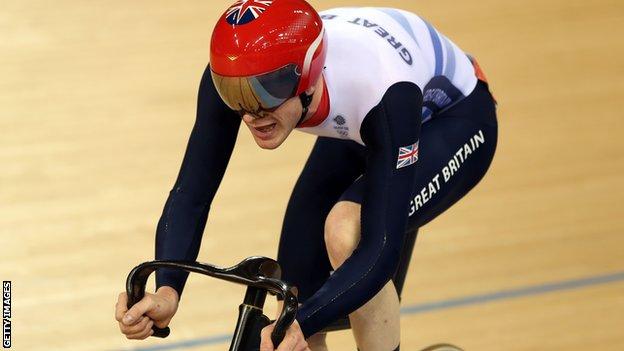 Ed Clancy won two races at the Revolution series in Manchester to help Rapha Condor hold their lead in the elite championship.

The Olympic gold and bronze medallist began Saturday night at the National Cycling Centre with victory in the flying lap in a time of 13.160 seconds.

The 27-year-old followed with victory in the elimination race, with British junior Jon Mould in third.

The event was the third round in a series of four meetings.

There was success too for Manxman Peter Kennaugh, 23, part of Team GB's Olympic gold medal-winning pursuit team with Clancy. He dominated the elite championship points race for Team Sky, amassing 28 points for victory.

The performance of Clancy helped Rapha Condor stay out in front in the elite championship, with Rudy Project RT remaining the title challengers in second overall place.

Meanwhile, Francois Pervis of France won the Revolution sprint and the keirin, whilst the French trio of Pervis, Matthew D'Almeida and Julien Palma also won the team sprint.

In the National Madison Championships held earlier in the day, Mould combined with George Atkins to win the main event on the final sprint.

The season's fourth and final Revolution event will be held at the Sir Chris Hoy Velodrome in Glasgow on 2 February.