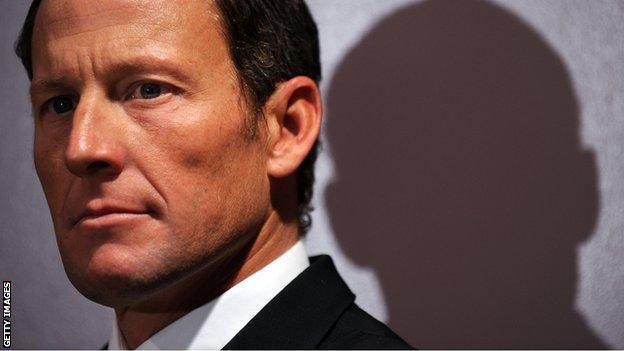 Lance Armstrong will have something to gain but plenty to lose when he is interviewed by chat show host Oprah Winfrey.

The 41-year-old US cyclist was stripped of his seven Tour de France titles by the sport's governing body after a damning report by the US Anti-Doping Agency (Usada) labelled him a serial cheat.

Armstrong will hope the 90-minute interview, to be broadcast on Thursday, 17 January, gives him a chance to put his side of the story.

However, he has repeatedly denied using performance-enhancing drugs in the past and any admission now throws open the possibility of legal action.

Here, we look at some of the potential pitfalls, and possible benefits, from his TV appearance.

How candid will he be?

Programme makers insist they will be be able to ask him any question, although lawyers believe some kind of agreement will be in place.

Nicole Nichols, from Oprah's OWN cable TV network, said: "There will be no payment of any kind for the interview. No editorial control and no question is off limits."

The interview, the first since he was stripped of his wins, will be pre-recorded for broadcast at 21:00 eastern time (02:00 GMT, Friday, 18 January).

Sports lawyer Simon Boyes, who lectures at the Nottingham Law School in the UK, questioned whether it would be a "no-holds barred" interview.

"I can't imagine Lance Armstrong would take the risk of going into the interview blind, with the potential to say something that could put him in a difficult position," said Boyes.

"I would be extremely surprised if there wasn't an agreement beforehand about the kind of questions that will be asked."

David Walsh, chief sports writer of the Sunday Times whose book Seven Deadly Sins details his work since 1999 to uncover the truth about Armstrong, hopes he will be honest.

"Maybe conditions will be set, but if there's going to be a confession worthy of the name it should be a complete confession," he said.

"I don't believe he can do this interview and offer nothing. I believe he will make an admission to doping. Otherwise, there will be a huge sense of 'what was the point of that?'"

What are the legal pitfalls?

Armstrong is already facing legal action on several fronts and any admission could prove costly.

Tyler Hamilton, Armstrong's former team and room-mate, himself an ex-doper, told me last year he hoped Armstrong would confess all, for his own sake. "He'll feel so much better the morning after," he said.

For Armstrong, though, the path from confession to catharsis to closure would have particular problems.

"Once he admits he doped, he loses any defence for the cases brought against him. That would have huge repercussions legally although just admitting that wouldn't be nearly enough," said Walsh.

"He has to address the fact that he set out to destroy the characters of those who accused him. If he doesn't make those apologies, how much sympathy should he get?"

Walsh's newspaper is suing to recover up to £1m after it made a payout to Armstrong to settle a libel claim.

Dallas-based insurance company SCA Promotions is seeking at least $11m paid to the cyclist in bonuses for winning the Tour de France.

The US Department of Justice is also considering whether to join a federal whistle-blower lawsuit filed by former Armstrong team-mate Floyd Landis alleging fraud against the US Postal Service during the years the agency sponsored Armstrong's teams.

"It's possible that donors to his Livestrong Foundation [the cancer charity he created] might bring some sort of fraud case."

New York defence attorney Stuart Slotnick added: "He's made various statements saying competitors weren't telling the truth and one of those could sue for defamation."

Boyes said sponsors could seek compensation, arguing that their brands have been tainted.

"Most sponsors' contracts will have a good behaviour clause,'" he said. "While it may be difficult to demonstrate any damage historically, I suspect it may not stop people."

Could he face a perjury charge?

Armstrong has testified under oath that he never used performance-enhancing drugs, which could theoretically lead to charges if he confessed.

Former US track star Marion Jones was given a six-month prison sentence for lying to investigators about her drug use.

However, the passage of time may well help Armstrong, who swore on oath in 2005 that he had never doped.

"Perjury is a statement under oath that is false and carries a potential prison sentence of up to five years," said Slotnick.

"But in most cases, with exceptions such as murder, the Statute of Limitations means you have five years in which you can be prosecuted from the date of any crime. After that time, a defendant can go to the judge and say it's too late.

"I'm sure Armstrong and his team will look back at all his statements to make sure he is clear for five years. Otherwise it might put him in jeopardy."

Could he return to sport?

The New York Times has reported that Armstrong hopes to compete in triathlons and running events.

"I believe he misses competing in stuff where he challenges himself and having something to measure himself against," said Walsh.

"Now from being somebody, he is a nobody. He doesn't have a reason to get up in the morning."

French attorney Thibault de Montbrial, who has been involved in several legal battles with Armstong's team, believes there may be another motive.

"He has said in the past that he would like to run for governor of Texas," he said.

"Now he has lost a lot of his credibility and I think he might be playing his last card - to try to appear very human and perhaps touch people's hearts.

"He is so ambitious and he might think there is a tiny chance of saving his political career."

De Montbrial thinks Armstrong will discuss his options with his lawyers but will not necessarily do what they suggest.

"He won't be like other famous people who blindly follow their advice," said De Montbrial. "Armstrong is not that kind of guy. He is very clever and strategic."

How will it affect his image?

It is widely thought Armstrong will attempt to use the interview as a platform for rehabilitation.

SCA lawyer Dorough draws a comparison with former US President Bill Clinton who recovered from a sex scandal.

"President Clinton left office under something of a cloud, but he's rebuilt his image over the years and he's more popular than ever," said Dorough.

"Armstrong might do the talk show apology tour, try to rehabilitate his image, maybe release a book. Who knows?

"But part of the contrition is atonement and atonement requires restitution. We are looking for a return of money we feel was paid in fraudulent circumstances."