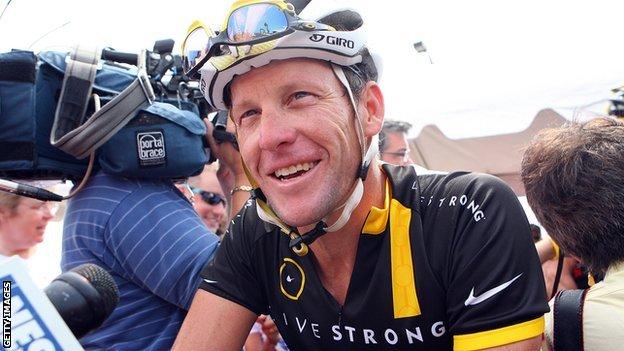 Cycling could be dropped from the Olympics if Lance Armstrong implicates the sport's governing body in a cover-up, says International Olympic Committee member Dick Pound.

Oprah Winfrey has conducted an interview with Armstrong that will be broadcast on Friday at 02:00 GMT.

Winfrey says Armstrong "did not come clean in the way I expected" about claims he doped during his career.

The interview could put the spotlight on cycling's governing body, the UCI.

Pound, a former head of the World Anti-Doping Agency (Wada), said: "The only way it (cycling) is going to clean up is if all these people say 'hey, we're no longer in the Olympics and that's where we want to be, so let's earn our way back into it.

"The IOC would have to deal with it. The (UCI) is not known for its strong actions to anti-doping.

"It was the same in weightlifting a few years ago. All of a sudden when you get right up against it things go fuzzy and they say, 'well, we can't punish innocent athletes in these sports by dropping the sport from the programme'."

Armstrong, 41, was accused of leading "the most sophisticated, professionalised and successful doping programme" in sport by the US Anti-Doping Agency (Usada) last year.

He was stripped of his seven Tour de France titles and banned from competitive sport.

Meanwhile, the UCI has called on Armstrong to testify to its commission on doping if, as expected, he admits to having doped during his career.

"If these reports are true, we would strongly urge (Armstrong) to testify," a statement from the UCI read.

The UCI added it would not comment further until the interview has been broadcast.

An independent commission was established by the UCI following the publication of Usada's investigation into Armstrong.

Usada also raised questions about the UCI's own role and relationship with Armstrong during his career.

"While Wada encourages all athletes to come clean about any doping activities they have been involved with or know about, these details must be passed on to the relevant anti-doping authorities.

"Only when Mr Armstrong makes a full confession under oath - and tells the anti-doping authorities all he knows about doping activities - can any legal and proper process for him to seek any reopening or reconsideration of his lifetime ban commence."