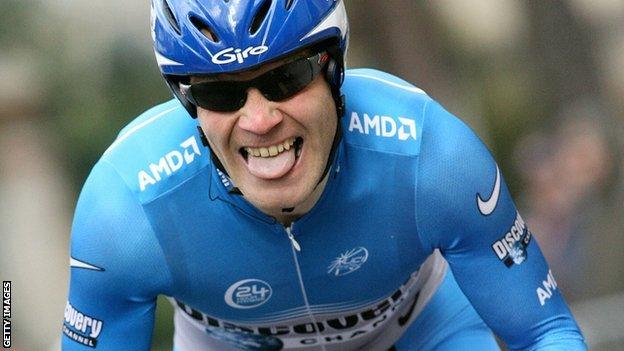 Roger Hammond knew what he wanted to do in life from a young age.

At six years old, following an afternoon in front of the TV watching the Paris-Roubaix road race, he wandered into the kitchen with something important to tell his parents.

One day, he confidently told them, he would win that race.

As one of cycling's Classics, Paris-Roubaix is renowned for the unique challenge it poses to the professional cyclists who annually compete in it.

The route in northern France incorporates large sections raced over cobblestones, remorselessly shaking the competitors, with riders often physically exhausted by the time they finish. There's a good reason why the makers of a 1976 documentary about the race called their film "A Sunday In Hell".

So young Roger's bold prediction could easily have been dismissed as nothing more than a childhood fantasy.

Only his dream almost became reality.

"It was dry that day I watched the race. There was dust everywhere, it seemed like chaos. In the whole race - there was always something amazing going on. Crashes, attacks, the suspense to the finish, it captured my imagination," says Englishman Hammond, 38.

"From that day on every decision I made revolved around Paris-Roubaix.

"So I took French as an A-level because I wanted to be able to speak French, for when I joined a French team, to be ready [for the race].

"I rode cycle-cross throughout my career so I could improve my bike skills, as the race is all about riding and slipping on the cobblestones."

It took him almost two-and-a-half decades before he got a chance to compete in the one-day race that had dominated his life.

"I made so many mistakes. I forgot my race food and all the things that I did day in and day out as a bike rider went out of the window. I rode on adrenaline to the finish line. But it was an amazing experience."

The following year, in 2004, encouraged by his first attempt, he returned determined to win.

"Can you imagine? My childhood dream. I turned into the velodrome [where the race finishes], in the front group, sprinting for the win in the Paris-Roubaix.

"I lost by a bike length, so I have mixed emotions about it. It's the one I should have won."

Lance Armstrong's interview with Oprah Winfrey has disturbed and angered him.

He already feared his era within the sport had been tarnished by the numerous drug scandals that have dogged cycling's recent past.

And, after spending two years in the same Discovery Channel team as Armstrong, from 2005 to 2006, he feared he would be "guilty by association" once the, now deposed, seven-time Tour de France winner decided to confess.

"I'm one of the guys that rode with the Discovery Channel team that's looking forward to the investigations being made public so that people will now believe me," said Hammond.

But he feels Armstrong has now gone one stage further with his interview to Oprah and tarred every rider from that period with doping.

"I didn't dope. I chose not to dope," added Hammond.

"I realised there was a lot of doping in cycling. And I got caught up in the fact that I couldn't win because everyone else was cheating.

"As an athlete that's a vicious circle. So you either join them and carry on with them. Or you go the other way and just concentrate on what you did yourself. And so I concentrated on myself. I asked myself what I could do to make myself as good as possible."

Trying to be the best without recourse to synthetic processes involved many sacrifices, such as giving up decent accommodation during one stage of his career. Instead Hammond bought an £8,000 altitude chamber to sleep in so he could increase his endurance levels.

He is one of an unknown number of riders from Armstrong's era who claim they competed clean, who say they chose not to put a cocktail of drugs into their bodies or undergo blood transfusions in order to maximise their chances of winning.

And his story puts Armstrong's words, that doping to win was as essential as "putting water in our bottles" or "air in our tyres", in sharp perspective.

For many years he believed that Armstrong and others, involved in what the US anti-doping agency described as one of the most sophisticated doping programmes in sporting history, had got away with their actions.

But there is a reluctance on Hammond's part to rejoice in any form of justice that may now, slowly, be administered to the guilty.

"I feel very uncomfortable talking about this," said Hammond. "Mainly because I chose not to be part of it, and I find it disheartening that I have to be involved with it [now].

"But unfortunately the people who've come out and talked about it have implicated me, so I have to defend myself.

Moving forward may be tough for cycling in the short term but it is something Hammond is already doing.

Now race director with the Madison Genesis team, he can reflect on career achievements that include back-to-back National Road Race Championships and a seventh place in the 2004 Athens Olympics road race.

But it is the "Sunday In Hell", the 260km of "chaos" of Paris-Roubaix, that will always hold a special place in his memory. That, and a clear conscience.