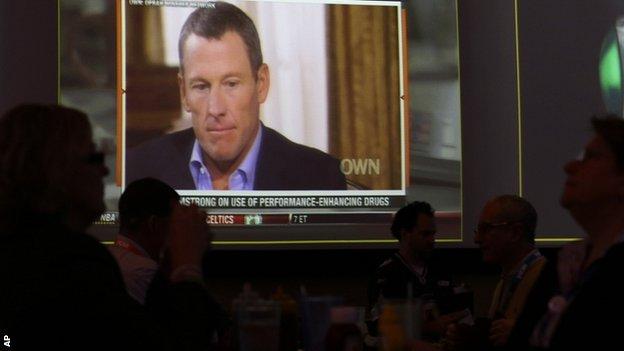 Lance Armstrong's desire to return to competitive sport is unlikely to win much support, judging from reaction to his televised confession to doping.

In the second part of his interview with Oprah Winfrey, the former cyclist held back tears as he spoke of the impact on his family of his use of performance-enhancing drugs.

But his tears failed to move commentators still smarting from years of deception.

The 41-year-old's use of the phrase "death penalty" in reference to his lifetime ban from competitive sport was seen as particularly insensitive given his own battle with cancer.

French website Sport 24 noted that Winfrey had steered the second part of the interview to "her favourite ground: emotion," while the Guardian said that "viewers who yearned to see the granite facade crack" will have been satisfied.

Le Monde newspaper agreed, saying Armstrong "showed a little emotion and fragility, unlike the cold confession the day before".

Similar questions have been repeated in the press for the past two days as commentators question whether it's possible to believe a man who lied so determinedly for so long.

The Washington Post said it was still unclear what it was Armstrong regretted most - "the fact he cheated his way to seven Tour de France titles, lied about and vilified his accusers or that he got caught".

During the interview, Winfrey invited Armstrong to apologise to David Walsh, the Sunday Times journalist who first raised questions about the Texan in 1999.

In response, Walsh took to Twitter to say he would accept such an apology.

"Oprah pressured him, the apology was, I thought, hesitantly promised. I didn't ask for it, or expect it, but, yes, if offered, I accept."

However, The Wall Street Journal was unimpressed by Armstrong's professed contrition, and criticised Winfrey for "inexcusably" failing to press him to speak further on those he had wronged.

The New York Times agreed, saying the chat show host had "predictably" failed to ask "critical follow-up questions that would have addressed the most vexing aspects of Armstrong's deception.

It described the interview as "more like a therapy session than an inquisition".

Germany's Suddeutsche Zeitung also took issue with the tone of the interview.

The paper characterised Armstrong as a "shark" who had successfully "concealed his teeth" during the conversation.

However, it said that the "horrible monster" may yet reveal itself when he is forced to answer more probing questions in a court room.

In the Telegraph, Brendan Gallagher took considerable umbrage with Armstrong's description of his life ban as a "death penalty".

"How can a man who has suffered from and beaten cancer, and was so involved with a cancer charity, utter those words and not hate himself for evermore?"

The greatest advance made on cycling's behalf has been the eventual, inevitable and absolute shaming of its greatest fraud.

Germany's Frankfurter Allgemeine made a similar point: "He called the lifetime ban a death penalty. What should a cancer patient think of this metaphor?"

And so it seems the world agrees with Armstrong's assessment of himself as "flawed", perhaps only differing on the extent of these flaws.

The Australian newspaper said that "such was Lance Armstrong's divorce from morality" that each time he was called a cheat "he reached for a dictionary and looked up the meaning of the word".

The Herald Sun called him "the most cold-blooded, calculating cheat in the history of sport".

It went on to say: "The greatest advance made on cycling's behalf has been the eventual, inevitable and absolute shaming of its greatest fraud.

"His own words have made that process complete."

A more reflective piece in India's The Hindu questioned what the whole episode said about our perception of sporting heroes.

"Betrayal is not new to the world of sport. But this is the mother of all betrayals because it involves not just sports fans who watched cycle races for thrills; it is something that spears into the very core of our being as we begin to question our very humanity. How could so many have been so gullible for so long?"