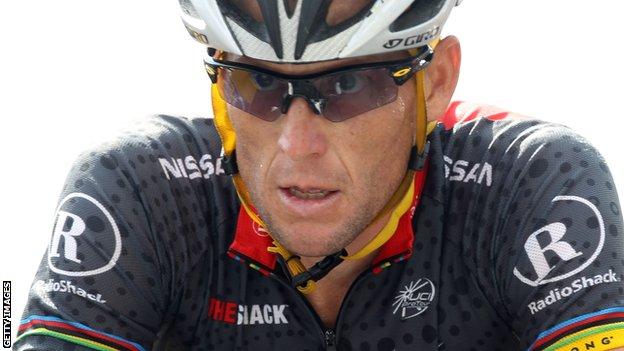 A Texan company plans to file a lawsuit next week to recoup $12m from disgraced cyclist Lance Armstrong.

The American has admitted using performance-enhancing drugs for all seven of his Tour de France wins.

"We will likely file that lawsuit as soon as next week unless we get a satisfactory response from Armstrong's camp," SCA lawyer Jeff Tillotson said.

Lance Armstrong neither has the legal right, nor frankly the moral right to keep those funds

The insurance policy was taken out by Tailwind Sports, owner of the US Postal team, to cover performance bonuses payable to Armstrong if he claimed his fourth, fifth and sixth Tour victories.

SCA initially refused to pay out money covering the bonus for Armstrong's sixth Tour win in 2004, totalling $5m, because it argued Armstrong was not a clean rider.

Armstrong took the company to an arbitration hearing in Dallas in 2005 and won, because the contract between the parties stipulated the insurance money would be payable if Armstrong was the "official winner" of the Tour.

But, after Armstrong's confession of doping to Oprah Winfrey this week, Tillotson said his client would be looking to recover the money, now assessed at $12m because of legal costs and interest.

"As you can imagine, we paid him $12m for being the official winner of three Tour de France races and swearing under oath he was a clean rider during those races," Tillotson told BBC 5live's BeSpoke programme.

"He's now told us, at least though Oprah, that he lied when he told us he was a clean rider.

"He doped during all those races, and Usada and UCI have stripped him of his official title status. So under those circumstances my client naturally wants his money back.

"We have made a demand for return of the $12m and if that money is not returned to us, my client will pursue litigation.

"He feels Lance Armstrong neither has the legal right, nor frankly the moral right to keep those funds."

The Dallas attorney also gave his reaction to the Armstrong interview with Winfrey, saying he found it "jaw-dropping" that the American had admitted all the things he denied in the arbitration hearing in 2005.

"Every question in his testimony that he answered no to when I asked him, he answered yes to Oprah Winfrey," he said.

"So it was pretty clear from the first few minutes of the interview he was admitting that he had committed perjury in our legal proceedings in the US.

"From our perspective we were somewhat floored by how quickly he admitted that."

Tillotson said Armstrong was yet to get in touch with him personally, or SCA Promotions.

"I think the lawyers are the last ones you get around to apologising to so I won't take it personally. But he does need to make amends to my client," Tillotson said.

"We are the ones where he took an oath under US law to tell the truth and pointedly lied to. So I feel we are high on the list of people that need to be told 'I'm sorry I did that to you'.

"We are open to working things out in a way that makes sure justice happens in this."

There have been suggestions that Armstrong could also be charged with perjury for lying under oath in 2005 but Tillotson admits this is unlikely to happen.

"In the US, if you lie under oath in a legal proceeding there are two possible penalties that can happen to you," he explained.

"One is criminal - you can be prosecuted by the authorities for lying under oath. That carries with it though a Statute of Limitations and it must be brought within a certain period of time of your lie.

"It's most likely the limitations have run, so Mr Armstrong could not be criminally prosecuted for perjury.

"But there is a second penalty which is in the civil lawsuit, (which) my client is pursuing. Mr Armstrong can be held accountable for that conduct."