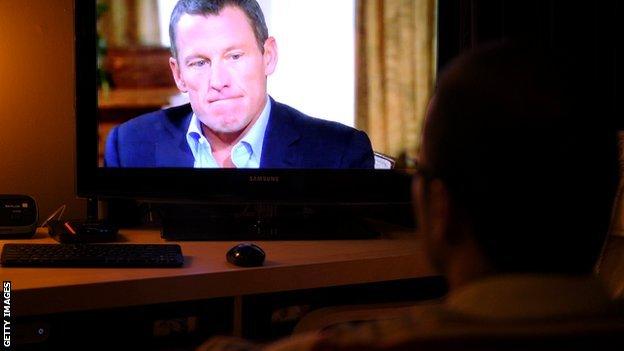 Reaction to the latest instalment in the Lance Armstrong "narrative" - a "mythic, perfect story" that has finally been exposed as a very real and sordid lie - has filled the airwaves, emptied forests and kept the fairies that make the internet work busy over the last 48 hours.

One of the people "run over" by Armstrong during his "arrogant jerk" years, which by his own admission appear to account for his entire adult life, recently told me it has "become easy" to pile into the fallen hero now his legal weaponry has been so emphatically spiked by the truth.

The point Betsy Andreu was making was 'where was I when it wasn't so easy, when the great man wasn't on the ropes, with his guard down and legs wobbling?'

Fair comment was all I could counter with, before trying to mitigate my failings by pointing out how hard it was to crack the "one big lie" (told many, many times) without the coercive powers of those who Armstrong described as men "with a badge and a gun".

As it happened, that is not how the United States Anti-Doping Agency (Usada) compiled its 1,000-page bunker-buster of a case against him. The 11 former team-mates who testified against Armstrong and his five co-conspirators did so under oath, and in a less comfortable confessional than Austin's Four Seasons Hotel, but they were not forced to do so.

There were, however, a few brave souls who did take on Armstrong's army even before open season was declared with the publication of Usada's evidence last October. It has been good to see so many decent people vindicated.

But now that it is all out there - well, the bits that matter to the American mainstream audience that Armstrong must win back if he is to have any chance of avoiding an eternal place in every "biggest cheats/frauds/liars" compilation - what is Lance's legacy for cycling, the sport he dominated, enriched and transcended?

Tragedy is a vastly overused word in sports reporting, so I will tread carefully and say the inheritance that the former seven-time Tour de France champion has left his sport is pretty meagre.

An indication of this came in a powerful piece of radio on Friday night. Jeremy Whittle, a cycling journalist who wrote about his own journey to Lance enlightenment in the excellent "Bad Blood", was asked if he trusted today's generation of riders. The answer was as bleak as it was damning.

"I'll never trust anybody again. And I'm talking about people I would happily share a bottle of wine with over the course of an interview," he said.

"I have trusted people in the past and repeatedly that trust has been betrayed. So I will go to the next Tour de France not trusting anybody.

"That is the best position to adopt if you want to be really clear and pragmatic about where this sport is at. They will have to earn my trust because of all the damage that has been done."

It is a sentiment I have heard recently from several others - journalists such as Paul Kimmage and David Walsh, the anti-doping expert Dr Michael Ashenden, and former riders Christophe Bassons and Jorg Jaksche, all men who were ahead of the game in regards to the tawdry Texan.

Given their experiences in dealing with Armstrong, and the corrupt culture that enabled him to thrive, it is hardly surprising they feel this way. It will take more than slower speeds up mountains and Sir Bradley Wiggins losing his temper to convince them it is safe to believe again.

Yet amid the wreckage of the first international superstar cyclist's career there is genuine hope for the future.

After hearing Armstrong tell Oprah Winfrey that he thought it was impossible to win the Tour without doping I phoned David Millar, who was caught with cycling's drug du jour EPO in 2004 but has since become one of his sport's most credible advocates for change, to ask if this was true.

"Yes, it is fair for him to say that," he admitted.

"In 1997, I remember asking Tony Rominger (a leading rider at the time) if you could win clean and he said 'yes, but not a grand tour (the Giro, Tour or Vuelta)'.

"That was how it was when Lance came onto the scene. The sport was in a horrible state, it had got out of control.

"But what we've done now - in the last four or five years - is a total shift. We're a new sport, we're very healthy and I'm proud of where we are now.

"That guys like Bradley Wiggins can win the Tour as an unequivocally clean athlete is evidence of that.

"I've got a young son and a few years ago the last thing I would have wanted for him was to become a professional cyclist. Now I'd have no problem with that. We're a different sport."

I, for one, want to believe this, and by and large I do. But then nobody has lied to my face. At least not as far as I know.

This issue of how different cycling has become was addressed by Armstrong early in his interview with Winfrey.

In a section that could have been scripted by the sport's beleaguered governing body, the International Cycling Union (UCI), he said the development of rigorous new testing procedures after his first retirement in 2005 made it too risky for him to continue cheating when he returned to professional cycling in 2009.

Do we believe him about being clean in his comeback? Hmmm. Close inspection of 38 of his blood samples from that period by the Australian Institute of Sport suggested there was a one in a million chance of them being kosher. He has always maintained he was special, though.

But we can have more faith in the biological passports. No anti-doping system will ever be unbeatable - there will always be a minority in every group willing to explore new methods of cheating - but it is clearly better than the tests Armstrong and co so easily evaded.

Some 4.3m people in the United States watched part one of the Armstrong interview on Winfrey's OWN network. In addition, 600,000 people watched the live steam on Oprah.com. No viewing figures are yet available for the Discovery Channel's coverage in the UK.

What would be really useful, however, is some input from Armstrong on making the tests even more robust. Who better than the one who so nearly got away with it to point out the weaknesses in the system, and name the bad apples who helped him exploit those weaknesses?

Information like this would help him with his bid to lift "the death sentence" he was given in October.

But if Armstrong is to qualify for the kind of reduced sentence that his accusers got, he must actually help the authorities with their inquiries. This is a basic tenet of western justice, and it is a quid pro quo he flatly refused when it was offered to him.

He gets this now, of course, as he made clear to Winfrey in part two of their some-holds-barred, tell-bits interview. But then, in the very next breath, he admitted this is not "going to happen and I've got to live with that".

Yes, Lance, you will have to live with your lifetime ban from sport unless you drop the careful legal strategies, show real remorse and tell the anti-doping authorities something they do not already know.

Until that occurs Armstrong will remain banned, cycling will be none the wiser as to how these scandals keep happening, and Millar, Wiggins and a growing percentage (I hope) of the peloton will have to continue to perform under a cloud of suspicion that is not of their making.