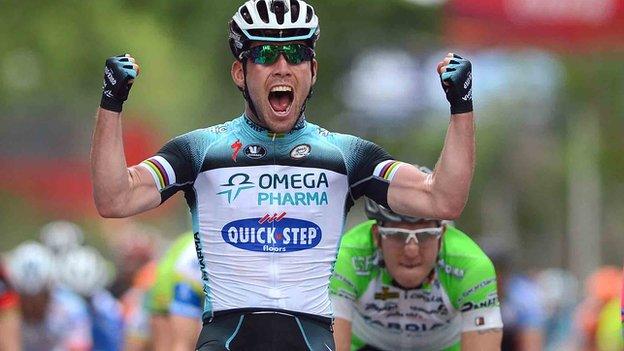 Britain's Mark Cavendish won the opening stage of the Tour of San Luis in Argentina on his debut for the Omega Pharma-QuickStep team.

The Manxman launched his attack 200m from the line, holding off Sacha Modolo and Alessandro Petacchi to snatch victory.

"The team did a great job for me," said Cavendish. "The guys rode so strong and stayed with me the whole day.

The guys really looked after me, so I had 100% energy at the finish

Cavendish endured a frustrating one-year spell with Team Sky in 2012 which saw him support Tour de France winner Bradley Wiggins and culminated in him quitting the British outfit for his new Belgian team.

He added: "It feels good to be fresh with a good bunch of guys and on such a fast bike.

Two-time Tour de France winner Alberto Contador was awarded the same time as Cavendish after finishing in the bunch.

Of the remaining six stages, two are sprinter friendly and therefore offer Cavendish an opportunity for victory.