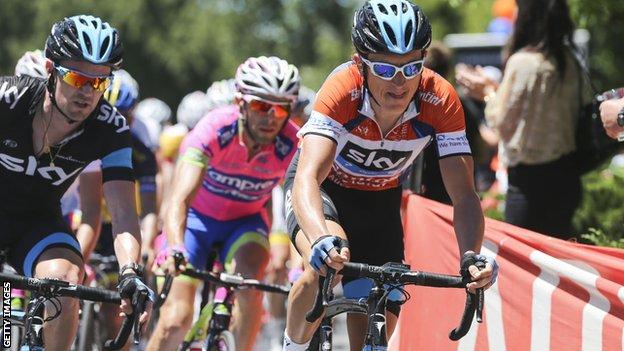 Geraint Thomas finished fourth in the third stage of the Tour Down Under and has retained the overall lead.

The 139 kilometre stage between Unley and Stirling, in the Adelaide hills, was won by Dutchman Tom-Jelte Slagter.

With three stages remaining, Slagter has closed the gap on Thomas in the overall standings to five seconds.

Team Sky's Thomas, 26, said: "It was down to me to try and get on the podium. It didn't quite happen but we've still got the jersey."

The boys were strong and we were always in control, but we definitely got tested today

Welshman Thomas missed out on gaining bonus seconds awarded for being in the top three.

Despite an eight-man breakaway around the 90km mark, Thomas's Sky Pro Cycling team controlled the peloton but, with 5km left, the race was together again.

Slagter's team-mate David Tanner brought the Dutchman forward and, when he decided to go for home, nobody was able to go with him.

Thomas said his team-mates had done everything asked of them.

"The boys were strong and we were always in control, but we definitely got tested today," he said.

On Friday the riders will take on the 126.5km fourth stage from Modbury to Tanunda in the Barossa Valley.

"It should be a bunch sprint, so it will all come down to Willunga (on Saturday's penultimate stage) and the big test up there," added Thomas.