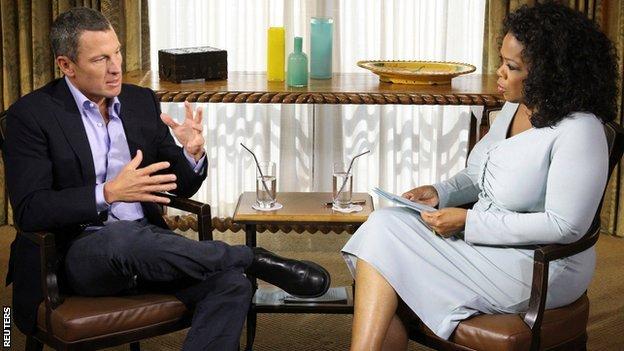 Lance Armstrong is lying about riding "clean" during his comeback to cycling in 2009, according to one of the world's leading anti-doping experts.

The disgraced American finally but claimed the last time he had cheated was in 2005, the year he won his seventh straight Tour de France.

This ran counter to scientific evidence against the 41-year-old contained in the United States Anti-Doping Agency's (Usada) 1,000-page "reasoned decision".

When asked, yes or no, if Armstrong was still lying about this, Dr Michael Ashenden told the BBC, "yes".

An authority on blood doping and biological passports, Ashenden has acted as an expert witness in a number of high-profile doping cases, including Spanish cycling star Alberto Contador's.

Biological passports are individual records of each athletes' blood values and were introduced by the sport's governing body, the International Cycling Union (UCI) in 2008.

"The passport is best suited as a monitoring tool, to help guide anti-doping authorities toward those athletes with suspicious results," Ashenden explained.

"In extreme cases, where the variations (from the riders' established norms) are quite radical, the evidence can support a doping violation on its own.

"But most times, results are either natural or suspicious, so the passport helps the testers focus on the suspicious ones."

Armstrong actually praised the biological passport, saying it "worked", only to go on to say he was "really upset" by Usada's claim he was still using the blood-boosting drug EPO and blood transfusions in 2009.

Usada's evidence was based on 38 samples collected from Armstrong between February 2009 and his final retirement from pro cycling. These showed highly unusual levels of the liquid content of his blood and reticulocytes (immature red blood cells).

Dr Christopher J Gore, the head of physiology at the Australian Institute of Sport, told Usada the likelihood of these blood values "occurring naturally was less than one in a million".

"Whether you call those results his biological passport or not is just semantics - his blood values during the 2009 Tour were consistent with having received blood transfusions," said Ashenden, who resigned from the UCI's expert group on biological passports last year because he refused to sign an agreement that would have prevented him from talking publicly about doping for eight years.

Ashenden went on to explain that the review of blood results is done on a step-by-step basis, with the testers being unaware of the rider's identity, or his or her competition schedule.

"If Armstrong had not been racing his results would have been normal. It was only the fact that he was racing, which should dilute blood levels, that his flat-line results become suspicious," he said.

Usada, of course, knew Armstrong's schedule when it reviewed his results, Ashenden added.

One man who will not be surprised to hear this rejection of Armstrong's claim of innocence in 2009 is the man who was narrowly beaten on to the podium in Paris by him, Team Sky's Sir Bradley Wiggins.

"I don't believe him, no. I think he's hanging on to that third place (which has now been taken away and given to Wiggins by the UCI), because without it he's really got nothing," the 2012 Tour de France champion said.

"I was very close to him in that Tour - in a physical sense, on the bike, watching his body language each day on the climbs - and I remember a broken man at the top of Verbier, when he couldn't respond to the attacks, and a week later, on Ventoux, he was a different bike rider."

Wiggins beat Armstrong by 29 seconds in that 15th stage to Verbier - a performance that seemed set to give British cycling what would have been its first podium finish at the Tour - only to lose 21 seconds in the 21st stage up Mont Ventoux.