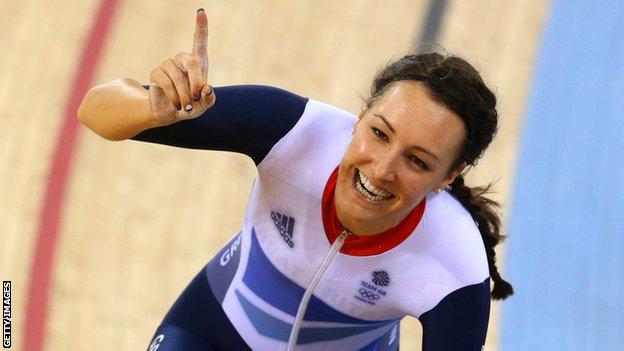 King is taking up road in addition to track cycling, with London 2012 team-mates Laura Trott and Joanna Rowsell, as part of the Wiggle Honda team.

The team is backed by Tour de France champion Sir Bradley Wiggins, through his foundation.

"It's incredible for me to have this opportunity. It's great for women's cycling as well," King said.

"It's such a professional set-up and it's great. I can't wait to race with the team. It's going to be a great year."

Armitstead, who spoke out about sexism in the sport immediately after winning her Olympic medal in London, has publicly questioned whether the Wiggle Honda team will help tackle the problem.

King, Trott and Rowsell, who won team pursuit cycling gold at the London Games, are part of the 12-strong team, which includes young British riders Elinor Barker and Amy Roberts.

The team, which is registered in Britain, is owned and managed by Australia's Commonwealth champion Rochelle Gilmore, who will also be one of the riders.

Trott, who won gold in the six-event omnium as well as in the team pursuit at London 2012, is looking forward to road cycling.

She said: "It's going to be really exciting focusing on something different, taking the pressure off winning all the time.

"We'll get the chance to help other people win, rather than just focusing on ourselves."

King, though, expects that she and her Olympic team-mates will continue to prioritise track cycling.

"Track still is my number one focus, but hopefully I'll be able to help the team perform and get a result myself, once I've found my feet a bit."

She plans to stick with track cycling for the 2016 Olympics in Rio de Janiero.

"I'll be aiming for the track, but never say never," she said.

"I haven't raced on the road yet - I might fall in love with it. At the moment, track's what I'll go for."