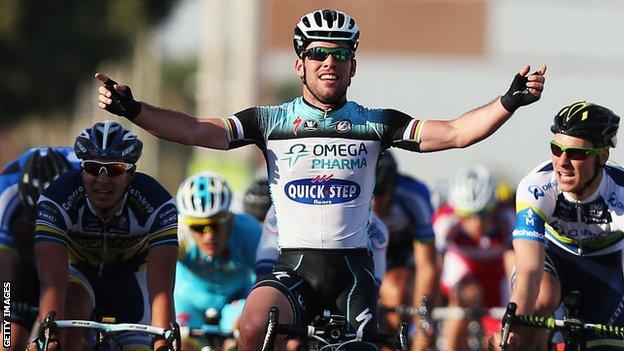 Mark Cavendish claimed his second win for Omega Pharma-QuickStep with victory on stage three at the Tour of Qatar.

The 27-year-old Briton beat Dutchman Barry Markus and Lithuania's Addis Kruopis in a sprint finish on the 143km stage between Al Wakra and Mesaieed.

Cavendish's win is his second for his new Belgium-based team, following a victory on the opening stage of the Tour of San Luis in Argentina in January.

The Manxman outpaced both Markus and Kruopis in a hectic finish, despite having to leave his team-mates behind after leading the peloton into the final few kilometres.

Cavendish launched his sprint with 350m to go and won in a time of three hours, five minutes, 14 seconds.

But he was coy when asked if he could win the race, despite being just eights seconds behind Bookwalter with three stages remaining of the largely flat race which favours sprinters.

"Anything can happen in this race. You have to take every day as it comes. I know I can make it every time in the front echelon, but things can happen," said Cavendish,

"I'm not saying it's out of the question, but we will see what happens."

Bernard Eisel is the best-placed Team Sky rider in the race, 11 seconds off the pace in seventh, while his British team-mates Geraint Thomas and Luke Rowe are four seconds further adrift.

The fourth stage is a 160km race from Camel Race Track to Al Khor Corniche.