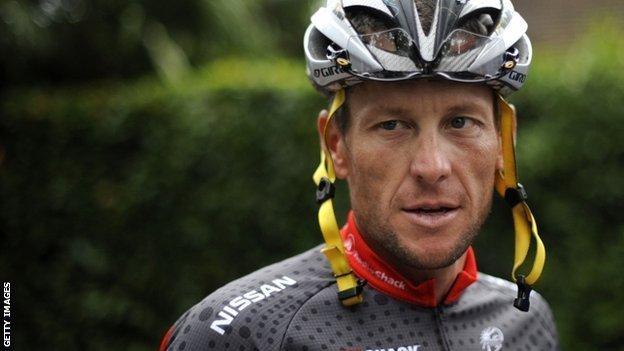 A Texan company has filed a lawsuit to recoup $12m (£7.6m) from disgraced cyclist Lance Armstrong.

The American has admitted using performance-enhancing drugs for all seven of his Tour victories.

SCA Promotions says Armstrong "perpetuated what may well be the most outrageous, cold-hearted and elaborate lie in the history of sports".

The firm's lawyer Jeff Dorough told BBC Sport the company is also seeking legal costs, interest and punitive damages from the 41-year-old American, who was stripped of his seven Tour titles after being exposed as a drugs cheat.

The insurance policy was taken out by Tailwind Sports, owner of the US Postal team, to cover performance bonuses payable to Armstrong if he claimed his fourth, fifth and sixth Tour victories.

Armstrong's representatives have issued a document which it says shows the two parties signed a "fully and forever binding" compromise settlement in February 2006, following the arbitration proceedings which ruled in the cyclist's favour.

It appears likely Armstrong, his lawyer Tim Herman, and his long-time agent Bill Stapleton, will be called to give evidence in court.

SCA initially refused to pay out money covering the bonus of £5m for Armstrong's sixth Tour win in 2004 because it argued he was not a clean rider.

Armstrong took the company to an arbitration hearing in Dallas in 2005 and won, because the contract between the parties stipulated the insurance money would be payable if Armstrong was the "official winner" of the Tour. He was awarded $2.5m in damages and costs.

But, after Armstrong's confession of doping to Oprah Winfrey last month, SCA is looking to recover a total of $12m, which includes payments after the 2002 and 2003 races.

"At the time of the arbitration, Mr Armstrong's legal team and representatives claimed repeatedly that SCA would only be entitled to repayment if he was stripped of his titles, and since that has now come to pass, we intend to hold them to those statements," added Dorough.

Armstrong's attorney Herman has said his client does not intend to repay the money.

How the costs break down

"My only point is no athlete ever, to my understanding, has ever gone back and paid back his compensation," Herman told USA Today.

He said the dispute should be solely with Tailwind, the owner of the US Postal Service-sponsored team Armstrong rode for, and not the cyclist.

An unsuccessful effort was made to settle the case out of court. The details of those negotiations have not been made public.

The latest development comes as US media reported that Armstrong could face a fresh federal investigation.

Jeff Tillotson, the Dallas Attorney who represented SCA in the 2005 case, told BBC Radio 5 live last month that Armstrong had a legal and moral obligation to return the bonuses.

"We paid him $12m for being the official winner of three Tour de France races and swearing under oath he was a clean rider during those races," said Tillotson on the BeSpoke programme.

"He's now told us, at least through Oprah, that he lied when he told us he was a clean rider."

Speaking on Thursday, he told the Press Association: "I don't think there's any dispute by Mr Armstrong or his lawyers that he lied under oath in our legal proceeding.

"The only question is what should be the penalty and consequence of that."

Armstrong is likely to avoid criminal proceedings for perjury for lying under oath in the original case in 2005 given the passage of time.