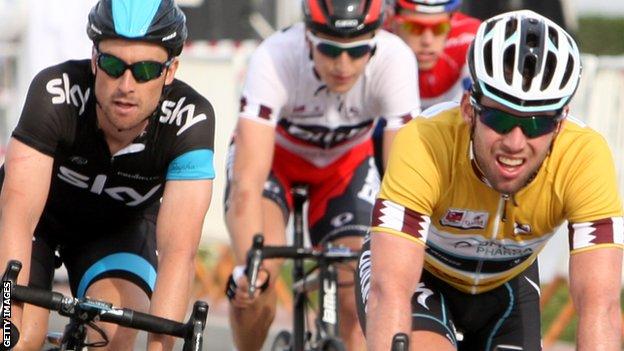 Mark Cavendish celebrated victory at the Tour of Qatar for a third successive day to establish a 15-second lead going into Friday's final stage.

Cavendish's sprint win on the 154-kilometre fifth stage left him close to the second overall win of his career.

As a Team Sky rider, Cavendish won the Ster ZLM Toer in June to claim his first general classification win

The 27-year-old British rider also tweeted praise for his team-mates for helping him win the stage from Al Zubara Fort to Madinat Al Shamal.

"Sat behind @opqscyclingteam from start to end & the sense of pride I felt, as they rode & rode, can't be described. Another win. Thanks guys," wrote Cavendish.

Cavendish, who claimed a 10-second time bonus with victory, will win the event if he successfully negotiates the 116km sixth stage from Sealine Beach Resort to Doha Corniche unscathed.

Bookwalter (BMC Racing) is 15 seconds behind in the general classification, with Taylor Phinney (BMC Racing) third overall at 20 seconds down.

Omega Pharma-QuickStep said on their website that Cavendish dedicated the victory to owner Bakala, who was celebrating his birthday.