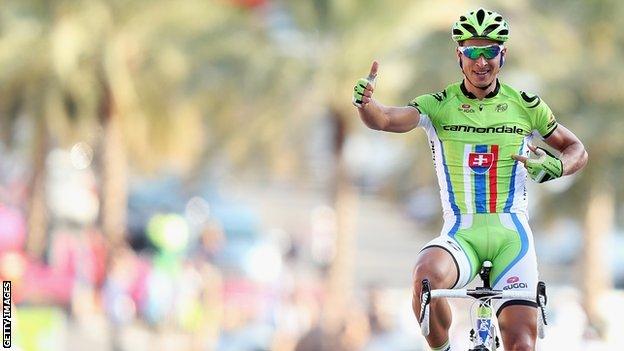 Peter Sagan launched a late attack to win the second stage of the Tour of Oman and take the overall lead.

Cannondale rider Sagan, 23, broke free from the pack in the final kilometre to finish nine seconds ahead of Tony Gallopin with Martin Elmiger third.

Tour of Oman leader board

Sagan now leads Gallopin, who rides for RadioShack, by nine seconds in the overall classification.

Froome is sixth overall while Wiggins, who struggled on the first day after being delayed by a crash, finished 11 seconds behind on Tuesday.

He is 1:42 behind Sagan and sitting in 55th position overall.

The six-stage race continues on Wednesday with the third stage route running over 190km between Nakhal Fort and Wadi Dayqah Dam.

The stage features a profile that will suit attacking riders like Sagan.