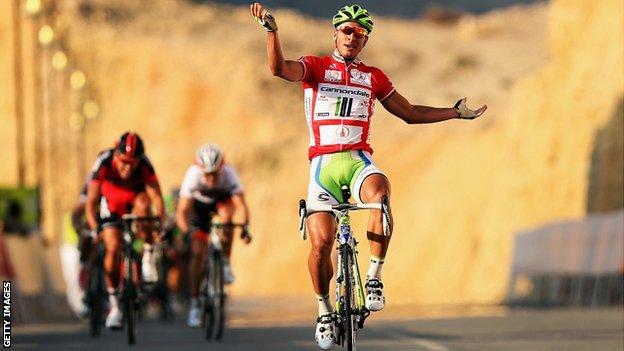 Briton Chris Froome's hopes of winning the Tour of Oman rest on him giving a strong display on Thursday after he slipped further behind Peter Sagan.

I'm really satisfied with this win, especially the way in which I got it

"Tomorrow's stage is the one that is going to decide the race, not today," said Nicolas Portal, sports director of Team Sky.

"It will suit Froomey and the plan will be to get him into the best possible position leading into the climb.

"It's never nice to drop out of the top 10 but it's tomorrow's stage which is going to prove pivotal and Froomey is in a great position heading into it.

"The team are in really good form so we're looking forward to a big day."

Sagan claimed his second consecutive stage win as he beat Belgium's Greg Van Avermaet of BMC and France's Tony Gallopin of RadioShack to take victory in the 190km third stage.

"Here at the Tour of Oman there are a lot of champions with different characteristics," said Sagan. "Each one could anticipate and try to attack. I'm really satisfied with this win, especially the way in which I got it.''

Thursday's fourth stage is a 152.5km ride through the mountains from Al Satiyah to Jabal Al Akhdar.