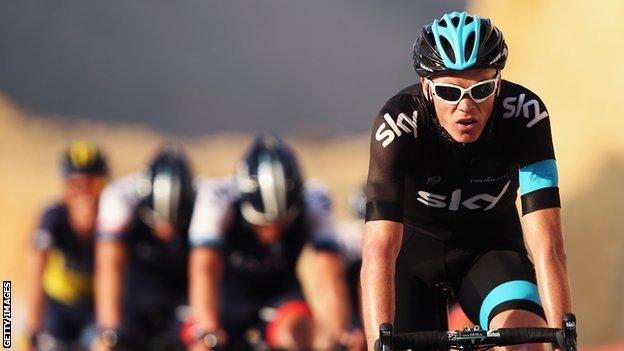 Great Britain's Chris Froome took the overall lead at the Tour of Oman by finishing second on the fourth stage.

The 27-year-old Team Sky cyclist finished behind Katusha's Joaquim Rodriguez on the 152.5km race from Al Saltiyah in Samail to Jabal Al Akhdhar to take a 24-second lead in the Tour.

Froome finished second in the 2012 Tour de France and 2011 Vuelta a Espana but has never won a major stage race.

He only has two more days left to keep his lead and end that record.

It was a stage the Kenya-born Briton after he slipped to 13th and 36 seconds behind Slovakian Peter Sagan on Wednesday.

And after that stage, Team Sky sports director Nicolas Portal said: "Tomorrow's stage is the one that is going to decide the race, not today.

"It will suit Froomey and the plan will be to get him into the best possible position leading into the climb.

"It's never nice to drop out of the top 10 but it's tomorrow's stage which is going to prove pivotal and Froomey is in a great position heading into it."

Froome is set to lead Team Sky's charge for the Tour de France this year rather than team-mate and defending champion Bradley Wiggins.