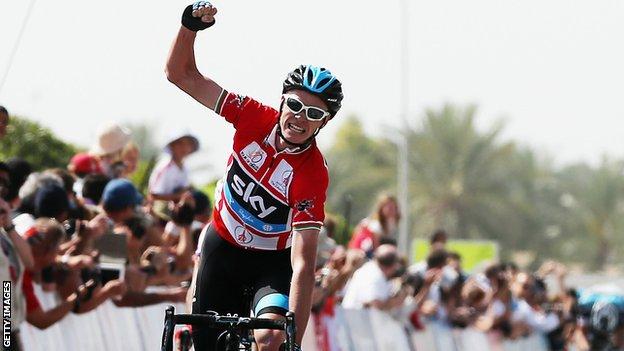 Britain's Chris Froome has extended his overall lead of the Tour of Oman by winning the fifth stage.

The Team Sky rider now leads by 27 seconds going into Saturday's final stage and is on the verge of winning his first major stage race.

Froome took the 144km Muscat to Boshar race in a sprint finish ahead of Alberto Contador of Spain, who moves into second overall.

Tomorrow hopefully the sprinters' teams will take advantage of the flatter profile and it should end in a sprint if all goes to plan.

Froome, 27, was previously runner-up in the 2011 Vuelta a Espana and the 2012 Tour de France but is now in a strong position to improve on those finishes.

On Friday, the Nairobi-born rider responded to Contador's attacks on the second and third of three climbs to finish half a wheel ahead of the two-time Tour de France winner on the line, with Joaquim Rodriguez just behind in third place.

"The team tried to keep things together as well as they could and coming towards the final two climbs Saxo Bank and our rivals lit up the race and made it very hard," Froome told Team Sky's website.

"That left me isolated with Richie Porte to look after me. He did a fantastic job, taking me up to the final climb where I was able to cover the moves from Contador.

"It was a really exciting finish coming down to a sprint between me, Alberto and Rodriguez. Luckily I just managed to get the better of them on the line.

"Hopefully the sprinters' teams will take advantage of the flatter profile [on Saturday's final stage] and it should end in a sprint if all goes to plan. I've extended my lead to 27 seconds so it puts us in a good place going into the stage."

Saturday's sixth and final stage is a largely flat 144km race that finishes with three laps of a circular circuit in Muscat.

Meanwhile, Rodriguez's Katusha team will be able to compete on the elite World Tour in 2013 after they succeeded in their appeal to the Court of Arbitration for Sport (CAS) to overturn the rejection of their original application.

The International Cycling Union (UCI) had rejected their application to compete in the top flight because of the Russian team's doping record over the past four years.