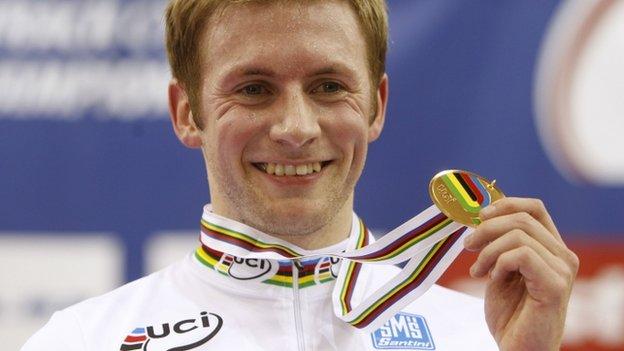 The race for Rio starts here. There are a total of 19 titles to be won at the Minsk Arena over five days of fast and furious action at the 2013 World Track Cycling Championships in Belarus.

As they begin their build-up to the Rio de Janeiro Games of 2016, their focus this week will be the five current Olympic events for men and women - the individual sprint, team sprint, team pursuit, keirin and the six-discipline omnium.

Olympic champion Chris Boardman and double Olympic medallist Rob Hayles, who will both be in Minsk analysing the action for BBC Sport, give their day-to-day guide of what we can expect from our established riders and fresh faces.

Great Britain had to settle for a silver medal behind Australia in the men's team pursuit after failing to defend their title on the opening day of the World Track Cycling Championships in Belarus.

Earlier, young duo Becky James and Vicky Williamson picked up Britain's first medal in Minsk with a bronze in the women's team sprint.

Great Britain won their first gold medal in Belarus as their women's team pursuit trio of Laura Trott, Dani King and Elinor Barkerbeat Australia to defend the title.Becky James won her second medal of the event, with bronze in the 500m time trial.

Northern Ireland's Martyn Irvine made history by becoming the first Irishman to win a World Championships medal for 117 years. He won silver in the individual pursuit before claiming gold in the 15k men's scratch race.

However, there was disappointment for Britain in the men's team sprint as Philip Hindes, Jason Kenny and Kian Emadi missed out on a medal after only finishing sixth in qualifying.

Great Britain's Jason Kenny came through the first-round repechage and then only made the final courtesy of the relegation of French rival Francois Pervis, but the 24-year-old took full advantage of his let-off,

Great Britain's second gold of the day came from a less-expected source. Simon Yates, 20, marked his first major competition with gold in the points race.

Elsewhere Becky James was in impressive form - going fastest in the opening seeded run and qualifying for the semi-finals of the women's sprint with ease.

Becky James clinched as she replaced fellow Briton Victoria Pendleton as world sprint champion. The 21-year-old for Abergavenny lost the opening race of her gold-medal final against Kristina Vogel, but recovered to take the next two and the title.

Jason Kenny could not replicate her success in the men's equivalent, finishing seventh after being eliminated in the quarter-finals.

Laura Trott won the elimination race to move into third in the omnium standings with three of the six disciplines complete.

Teenager Jonathan Dibben won the scratch race, but ended up eighth overall in the men's omnium.

Laura Trott's omnium defence ended in silver after a 10th-place finish in the points race that left her with too much to do in the final time-trial. Gold went to American Sarah Hammer who was a silver medallist behind Trott in the same event at the London 2012 Olympics.

In the madison Simon Yates and Owain Doull were unable to make any inroads in a race won by the French pair.

The men's sprint final were won by Stefan Botticher of Germany, but there was no British opposition to contest the final with Jason Kenny, Matt Crampton and Philip Hindes all eliminated on the previous day.