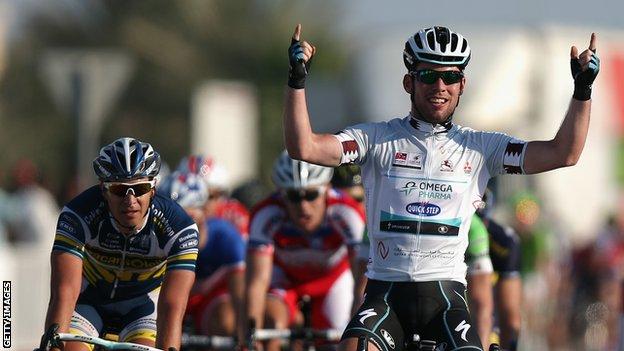 Mark Cavendish was critical of his Omega Pharma-Quick Step team-mates after finishing fifth in the second stage of the Tirreno-Adriatico.

Cavendish retained his overall lead but was frustrated at failing to win the flat stage - one of his strong points.

Orica-GreenEdge's Matthew Goss took the win after a sprint over the final 500m as Cavendish found his path blocked.

"I'm quite disappointed with my lead-out. It's not often I say that, but we'll have to have words," he said.

"I should have been in the front and I came into a bunch of chaos.

"We came into the last kilometre in 30th position. I'm pretty disappointed in those last guys today, actually. I had a lot of ground to make up."

Goss finished ahead of Manuel Belletti and Gerald Ciolek, with Roberto Ferrari taking fourth ahead of Cavendish on the run in to Indicatore.

Cavendish holds a two-second lead over team-mate Michal Kwiatkowski in the overall classification.

Team Sky's Chris Froome finished the stage in 92nd place. He is in 40th position in the classification, 28 seconds behind leader Cavendish.