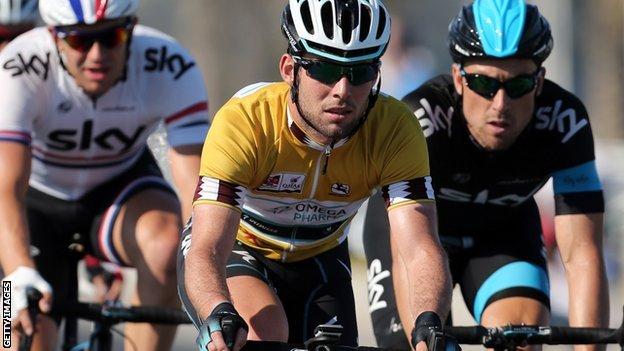 Mark Cavendish finished a close second behind Slovakian Peter Sagan on stage three of the Tirreno-Adriatico in Italy, but extended his overall lead.

The Manx rider was forced the long way around a roundabout but, assisted by his Omega Pharma-Quick Step team-mates, got back in position to challenge.

On Thursday Cavendish had complained about his team's tactics after only managing fifth on the second stage.

In wet conditions on Friday, Cavendish finished between Sagan and Lotto-Belisol's Andre Greipel as the sprinters contested a tight finish.

Sagan made his move with 200 metres to go, as he surged past the German Greipel and although Cavendish went with him he could not get off the Cannondale man's wheel.

With the race featuring a couple of steep mountain climbs in the next couple of days, Team Sky's British rider Chris Froome, former Tour de France winner Alberto Contador of Spain and Italy's climbing specialist Vincenzo Nibali are expected to move up the standings.

Nibali is the best-placed of the trio, 29 seconds behind Cavendish, while Froome is five seconds further back and Contador is 38 seconds adrift.

The race finishes on Tuesday with a 9.2km individual time trial.