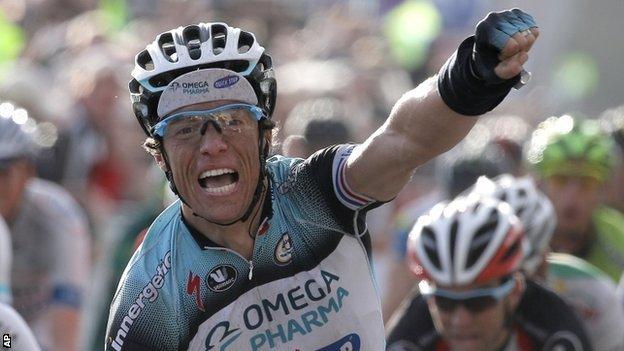 France's Sylvain Chavanel sprinted to a surprise win on the penultimate stage of the Paris-Nice race to put himself in contention of a podium finish.

Team Sky's Richie Porte finished in the leading bunch to retain his race lead and is 32 seconds clear of America's Andrew Talansky with Chavanel 10 seconds further back in third.

Porte, who is a decent time trial rider, goes into the final stage as favourite to succeed his team-mate Bradley Wiggins, who won this race last year but is not competing this time.

However, Omega Pharma-Quick Step rider Chavanel showed his battling qualities by outsprinting the more fancied Gilbert in the closing stages of Saturday's race into Nice, and he too is a competent climber and the French time trial champion.

Porte is looking to become the first Australian to win the week-long race - also known as the 'Race to the Sun' - and he was well protected by his Team Sky team-mates on Saturday's 220km race from Manosque to Nice.

Eleven riders opened up a lead of nearly four minutes a third of the way into the stage, but they were caught by the peloton with 37km remaining, leading to a sprint for the line.

Sunday's individual time trial promises to be intriguing with the traditional finishing climb up Col d'Eze, which features gradients of 8.5%, having only been reintroduced to the race in 2012 after a 10-year absence.