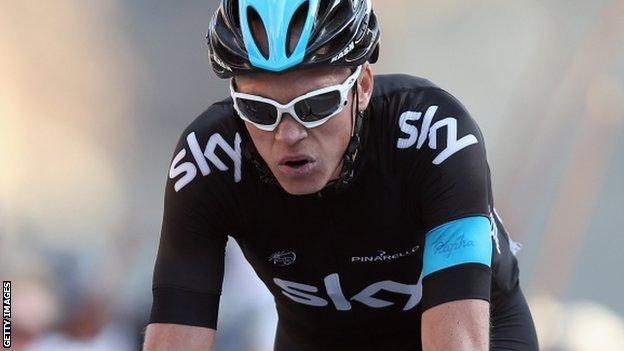 Britain's Chris Froome has moved into the lead of the Tirreno-Adriatico race in Italy with two stages to go after finishing sixth on stage five.

The Team Sky rider finished in a group that was eight seconds behind Spanish stage winner Joaquim Rodriguez on the climb to the finish in Chieti.

Poland's Michal Kwiatkowski, who started the day four seconds ahead of Froome, was dropped on the final climb.

Froome leads by 20 seconds from Alberto Contador and Vincenzo Nibali.

He is in a decent position to claim his second stage-race win of the season, having already won the Tour of Oman, with a rolling stage on Monday and Tuesday's 9.2km time trial remaining.

However, Froome said he was not taking victory for granted.

"It is a great position to be in, defending," he told the Team Sky website. "I would rather be doing that than trying to gain time over someone.

"But I'm expecting them to throw everything at us [on Monday]. I think the weather is going to take a turn for the worse too. The course is up and down all day so it is not going to be easy for us.

"Then the final day there is a 9.2km time trial to cap things off, so there is going to be fighting all the way to the line."

The fifth stage featured three categorised climbs and it was with 1.4km remaining on the final ascent in Chieti, after almost 230km of racing, that Rodriguez made the decisive move.

He attacked on the steepest part of the climb and crossed the line eight seconds ahead of a group of five riders that included Froome and Rodriguez's fellow Spaniard Contador.

"It was very hard for everybody after 230km - nobody had much left in the legs," said Froome.

Italy's Nibali, who won the Vuelta a Espana in 2010, finished on his own in seventh, a further nine seconds adrift.