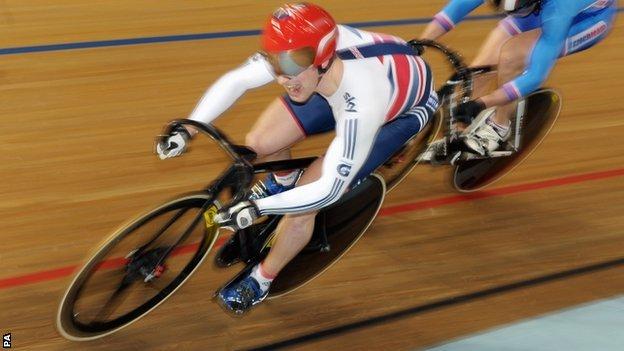 Olympic and world track cycling champion Jason Kenny has signed up to race in his debut motor racing season.

The 24-year-old, who won individual and sprint gold at London 2012, will drive in this year's one-make Ginetta GT5 Challenge Series.

"I'm looking forward to doing a few different things and one of them will be racing my car," Kenny said.

"I want to do a whole season - seven race weekends. I believe I can do so without affecting my training."

The Ginetta machines are similar to touring cars and the challenge series begins in Oulton Park on 30 March.

I haven't got an aim for Rio in 2016, a lot of things are happening between now and then - including the Commonwealth Games

Fellow Olympic gold medallist Sir Chris Hoy is also trying his hand at motor racing as he drives in the celebrity challenge at the Australian Grand Prix.

Kenny, who won keirin gold at last month's world championships in Minsk, said it's too early to say whether swapping two wheels for four is a future career option.

"It's still racing and I will see how it goes and take it from there," he said.

The Bolton racer is also keeping his cycling plans loose ahead of the 2016 Olympic Games in Rio.

"I haven't got an aim for Rio in 2016, a lot of things are happening between now and then, including the Commonwealth Games," Kenny added.

"I have never been to one - and I am just looking forward to those."

The Commonwealth Games take place in Glasgow in July and August next year.