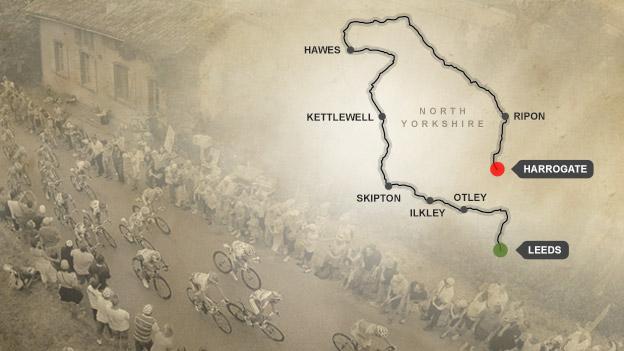 Welcome to Yorkshire, the organiser of the Tour de France's Grand Depart in 2014, has been warned that any government funding for the event comes with strings attached.

The Leeds-based tourism agency's plea for more than £10m to pay for staging the first three days of the world's biggest bike race was initially refused by the Department of Media, Culture and Sport (DCMS) and UK Sport (UKS).

But lobbying by local politicians, including Deputy Prime Minister Nick Clegg, led to a change of heart.

"The government wants the Tour De France Grand Depart 2014 to be a huge success and we are working hard, alongside the local MPs, to make that happen," a DCMS spokesman said.

"However, the current plans are not strong enough to deliver the world-class event we all want and expect.

"We would like to see a more joined-up approach to the organisation of the world's biggest cycle race which will ensure we maximise the benefits for Yorkshire and the other parts of England the race will pass through."

Chief among the government's requests is the formation of an Olympic-style organising committee to represent the interests of all stakeholders, in particular those involved in hosting the final day in England, the third stage from Cambridge, through Essex, to London's Olympic Park.

This could include the county councils of Cambridgeshire and Essex, the Greater London Authority and Transport for London, as well as representatives from DCMS, the Highways Agency and UKS, with British Cycling providing technical expertise.

Detailed plans for the two Yorkshire stages have been in the public domain since Welcome to Yorkshire was awarded the contract in December. But so far only the start and finish of the third stage have been revealed.

One source close to the decision on government funding said Welcome to Yorkshire's original submission was "half-baked" and lacked "strategic direction".

The elite sport funding body UKS declined to comment on the request Welcome to Yorkshire made for £1.7m of "major events" cash, but it is believed its position is in line with DCMS's: the money is available, providing a more holistic plan emerges.

Welcome to Yorkshire chief executive Gary Verity rejected criticism of his agency's plans for next July, telling the BBC the creation of an "overarching delivery group", chaired by him, was always part of the strategy.

He also pointed out it was his organisation that persuaded the race's owner, the Amaury Sport Organisation (ASO), to come to these shores for a fourth time, the first since London's successful staging of the Grand Depart in 2007.

"As the contract-holders for delivering this event, we will give it our best shot to deliver the maximum economic impact for Yorkshire," said Verity.

"The government have said they want to come on board now, so we'll work with them to do that.

"It is clear today the Tour has got many parents - and many who claim to be parents or who take credit for all kinds of things - but in the final analysis the only people who have the contract to deliver the Grand Depart are Welcome to Yorkshire and we will do that."

The BBC understands Leeds City Council has already paid ASO a £4m "staging fee", with additional costs of £2.5m underwritten by the various councils that host parts of the race. Most of this will now be recouped from the £10m promised by government.

It has been estimated that Yorkshire could see a return of £100m in terms of tourism revenues and increased international recognition. The 2007 Grand Depart, which saw London and Kent share two stages of the race, was thought to be worth £88m.

By strange coincidence, ASO president Jean-Etienne Amaury was in Leeds on Thursday, and he denied suggestions Yorkshire won the bid because it offered the most money.

"That wasn't the key point, and I don't think it was even the case," Amaury said.

"We chose Yorkshire because of its beauty, the quality of its infrastructure, and because British cycling has been doing so well."