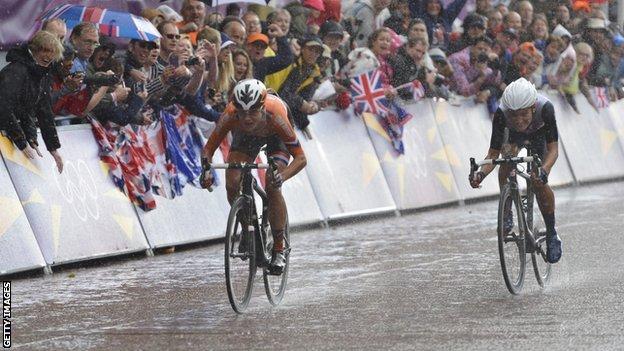 A one-day women's race is to be held in London ahead of the final stage of this year's Tour of Britain on 22 September.

Organisers are planning for the race to be a precursor to a five-day stage race being held in Britain in 2014.

A Tour spokesman told BBC Sport: "We are committed in the future to holding a multi-stage race and we are at the planning stage for a race in 2014.

"It will not be a Tour of Britain as it will probably be held in one particular region of the country."

The one-day race in London will take place over the same 8.8km circuit of the capital that the men will compete on and finish at Whitehall.

The men will complete 10 laps of the course but the distance of the women's race is yet to be finalised.

"The aim is for it to be a world level race and all of the UCI teams, such as the newly formed Wiggle Honda, will be invited," continued the spokesman.

"While we can sometimes take London for granted, a lot of the foreign riders think the chance to compete in London is great so hopefully the women's race will provide a good draw."

The Wiggle team features Britain's World and Olympic track champions Laura Trott, Dani King and Jo Rowsell who all race on the road as well.

On the future multi-stage race, the spokesman added: "It will not be held in conjunction with the men's race. Dates are being looked at and the UCI have been consulted and we are looking at calendars."

Britain's Lizzie Armitstead won silver in the women's road race at the London 2012 Olympics in a thrilling finish with Dutch champion Marianne Vos (pictured above).