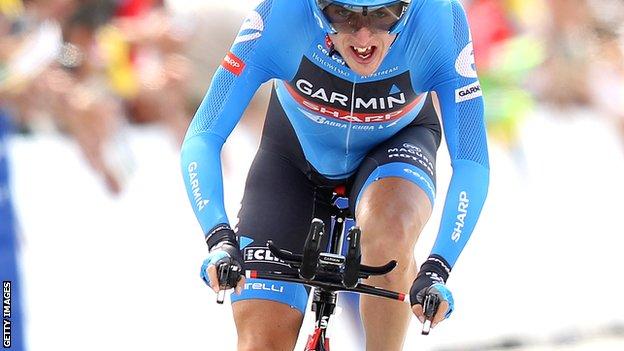 Irishman Dan Martin extended his overall lead to 14 seconds after the fifth stage of the Tour of Catalonia.

Britain's Sir Bradley Wiggins remains in fourth place but lost a further 10 seconds and is 46 seconds off the lead.

After two gruelling days of climbing through the Pyrenees, Friday's more manageable stage saw the riders finish in Lleida, which is nearly 500m lower than Rialp, where they began the day.

A total of 13 riders finished the 156km ride in the same time of three hours thirty-two minutes and two seconds.

Martin gained a bonus second by finishing third in a sprint and then captured a further three seconds on Spaniard Rodriguez in the dash to the line.

Wiggins briefly led Team Sky to the front of the pack, but eventually fell away as Parisien sprinted towards the line to take his first stage victory of the season. Martin finished in the leading group, with Rodriguez in a group of seven a further three seconds behind.