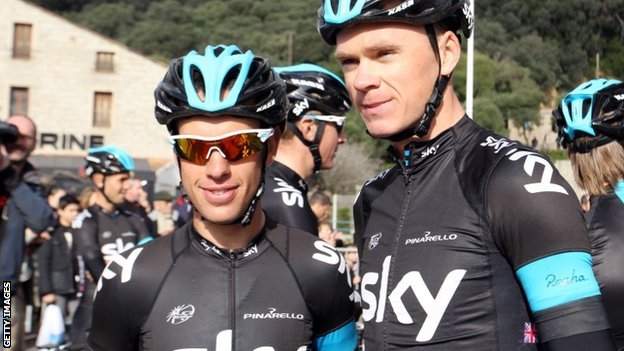 Australia's Richie Porte holds a one-second lead after the opening day of the Criterium International on Corsica.

The two-day, three-stage race began with an 89km ride, won by Theo Bos, and finishes with Sunday's 176km race to a summit finish at Col de l'Ospedale.

Bos outsprinted Nacer Bouhanni and Jonathan Cantwell in the opening stage but Porte finished in the main bunch and his superior time-trialling ability saw him leap to the top of the standings in the afternoon.

The third and final stage should also suit the 28-year-old, who won the week-long Paris-Nice race earlier this month, and Froome, who was runner-up to Sir Bradley Wiggins in the 2012 Tour de France.

"I will be delighted to help Chris [on Sunday] but I'm sure he'll be very happy to help me too," said Porte.

"It was quite a technical route this afternoon, and not my sort of a course, but I've done a lot of work on my time trial position, and that's definitely paid dividends.

"We're in a good position with me in the lead and Froomey sitting just a few seconds back. It's going to be quite tight [on Sunday] because there's a lot of good riders close to us.

"We came in with Froomey as our leader so if he's got good legs and I don't then I'll be more than happy to ride for him. Obviously, I'd like to finish the job off if I can, but as long as Team Sky win it'll be a great day and we'll all be happy."

Defending champion Cadel Evans, who is an excellent climber, almost fell off his bike on a descent in the time trial and finished 68th, 45 seconds adrift.

The stage finishes at the top of the Col de l'Ospedale, after a 14.1km climb at an average gradient of 6.2%.

The mountain overlooks Porto-Vecchio where the 2013 Tour de France will start on 29 June.