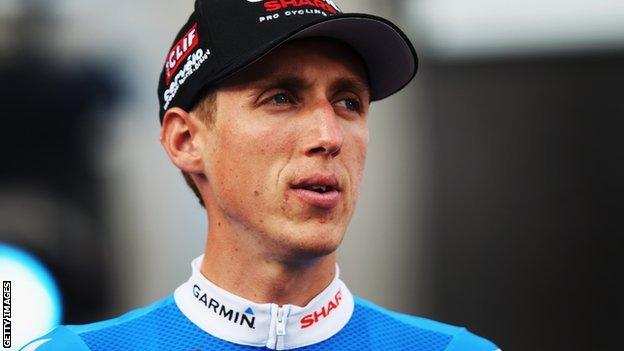 Ireland's Dan Martin won the Tour of Catalonia by finishing in the peloton on Sunday's final stage in Barcelona.

Martin, 26, tracked his main challenger Joaquin Rodriguez around eight laps of the Spanish city to ensure his 17-second lead was not eroded.

Britain's Sir Bradley Wiggins crossed the line in the peloton to end the race 54 seconds adrift of Martin in fifth.

The Belgian powered clear in the final 200m to win with ease, although Italian Scarponi's efforts saw him leapfrog Team Sky's Wiggins, who is preparing for May's three-week Giro d'Italia race, and finish third in the overall standings.

The 122km stage began in El Vendrell and finished with an eight-lap circuit around the Olympic park in Barcelona which featured the short climb of Alt de Montjuic each time.

And it was on the final ascent of Montjuic that Rodriguez finally made his move in an effort to break Martin but the gradient of the hill was not severe enough to test the Irishman who comfortably followed the Spaniard's wheel and nullified the threat.

"Winning here in Catalunya is very special, it's my home," said Martin, who rides for Garmin-Sharp and has recorded second, third and fourth-placed finishes over the previous four years.

"The key to the win has been [Giro d'Italia 2012 winner and team-mate] Ryder Hesjedal for his hard work in the break to Port Aine [on stage four, which Martin won] and in fact the whole team has done a lot of great work on each stage.

"We've had to defend ourselves from a lot of different attacks. Right up until the last lap we had to suffer and Rodriguez made several really difficult moves."

Rodriguez's bid for victory on stage seven echoed that of Team Sky's Lopez, who made a similar break from his fellow escapees on the final climb of Montjiuc, but he was caught on the descent into the Catalan capital where De Gendt proved the strongest in the finish.

Birmingham-born Martin cruised home with the rest of the main contenders in the bunch to become the second Irishman to win the week-long stage race, emulating the feat of Sean Kelly who won in 1984 and 86.