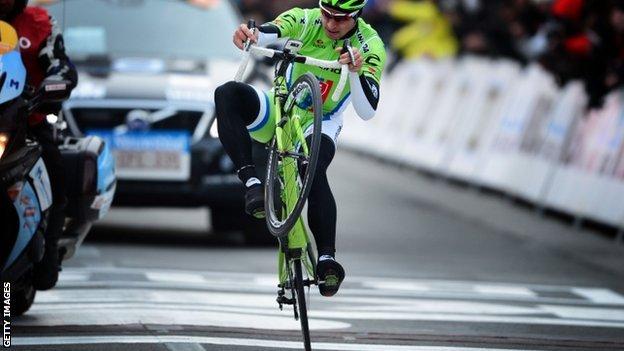 Sagan, who finished 23 seconds ahead of Slovenia's Borut Bozic, celebrated his victory by pulling a wheelie as he crossed the line.

Mark Cavendish was the best-placed Briton, crossing the line in a group 40 seconds adrift, in a race shortened by 50km because of the cold weather.

Geraint Thomas did not finish, while fellow Brit David Millar did not start.

Garmin-Sharp rider Millar withdrew through illness on a bitterly cold day in Belgium which saw the race have its ceremonial start in Deinze before the riders transferred by bus to the new start in Gistel.

Boonen clipped a kerb and crashed out, while Cancellara, who expended a lot of energy in helping his RadioShack team reel in the breakaway of an elite 25-man group that featured sprinters Sagan, Cavendish and Andre Greipel, pulled out 69km from the finish.

A trio of riders escaped prior to the climb up the Catsberg but they were brought back with 52km remaining only for a 13-strong group, featuring Sagan, to immediately break clear.

That break stuck and quickly established a two-and-a-half minute lead but Sagan, who had finished second in his previous two one-day races, last week's Milan-San Remo and the midweek E3 Harelbeke, was in no mood to give his rivals any opportunity to deny him victory on the cobbles in Flanders.

"This time I didn't want to wait, because they were all watching. I had to find another solution," said the 23-year-old, who jumped clear in the closing kilometres.

And he opened up enough of an advantage to perform a spot of showboating as he crossed the line in four hours, 29 minutes and 10 seconds.

Bozic won the sprint for second, beating Belgium's Greg Van Avermaet while Team Sky's Bernhard Eisel finished seventh after getting himself into the break.