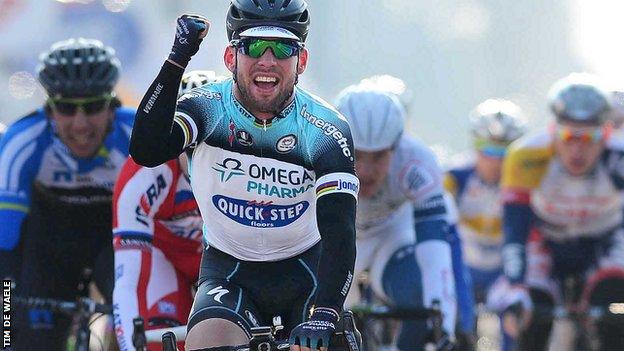 Mark Cavendish won the second stage of the Three Days of De Panne race in Belgium after a close sprint finish.

The Manxman's decisive attack inside the final kilometre saw him take the stage ahead of Italians Elia Viviani and Francesco Chicchi.

The Omega Pharma-QuickStep rider was helped by the efforts of his team-mates Iljo Keisse and Niki Terpstra into a headwind approaching the finish.

"The team was phenomenal for me today," said Cavendish after the 204km race.

"The guys had to go long just because of the wind. Iljo and Niki had to take some big, big pulls. But they were really strong and I am really proud of them."

The 27-year-old, who won the Tour of Qatar in February, overhauled Viviani by half a bike length for his seventh stage win of 2013.

Cavendish is in third place overall in the race, five seconds behind leader Arnaud Demare of the FDJ team but one second ahead of defending champion and Omega Pharma team-mate Sylvain Chavanel.

The race finishes on Thursday with a 109 km stage finishing in De Panne and a 14.75km individual time trial.