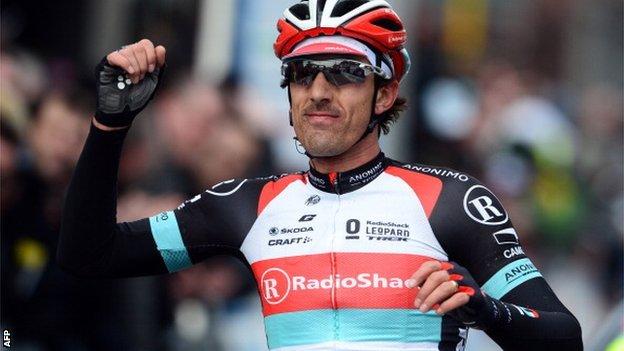 Fabian Cancellara powered to victory as he claimed his second Tour of Flanders title ahead of main rival Peter Sagan.

The Swiss rider burst clear of the field on the final climb of the day to win by one minute and 26 seconds ahead of Slovak Sagan and Jurgen Roelandts.

Defending champion Tom Boonen also crashed out in what is the second of the season's monument races.

The 256km (159 miles) race, which was celebrating its 100th anniversary and is one of the most prestigious one-day races of the season, started on the outskirts of Bruges before heading towards Oudenaarde, featuring 17 short climbs and 17 cobbled sections.

There was drama early on when Belgian Boonen's race was brought to a premature conclusion after 19km. The three-time champion, who rides for Omega Pharma Quick-Step, was transported to hospital with a hip injury as well as wounds to his left elbow and right knee, although X-rays revealed no broken bones.

However, his team manager Patrick Lefevere told Belgian sports channel Sporza: "His spring season is over."

Thomas had a crash of his own just as the pace began to crank up ahead of the cobbled climb up the Oude-Kwaremont.

The Welshman clawed his way back into contention, catching the lead group with 24km remaining but he was unable to keep pace when the attacks started and he finished the race two minutes, 49 seconds behind the winner.

All eyes were on Cancellara and Sagan and the duo did not disappoint going toe-to-toe up the Oude Kwaremont but when the Radioshack team rider upped the pace on the final climb of the Paterberg, Sagan was unable to stay with him.

There was still 13km remaining after reaching the summit but Cancellara, a four-time world time trial champion, powered away, reaching speeds in excess of 30mph.

Such was the advantage that he built up, Cancellara was able sit up and cruise over the line after six hours, five minutes and 58 seconds of racing.

"The goal was to win but you can't predict how that's going to happen," said the 32-year-old.

"Everyone did a great job, the team did fantastic and in the end everyone expected I would go on the Paterberg. I had a nice feeling on the cobbles that I could go.

"On these cobbles I have this special thing and I saw many Swiss flags so I did what I had to do and bring the Ronde home."

"It's amazing. One year ago I was on the ground [after crashing out of the Tour of Flanders] and now I'm back and I've won. Winning as a big favourite is not easy but I'm very happy."

Lizzie Armitstead, who finished second behind Vos at London 2012, was the best-placed British rider in ninth, two minutes, 39 seconds adrift.

The next big race of the Spring Classics sees the riders tackle Paris-Roubaix on Sunday, 7 April - a race more affectionately known as the 'Hell of the North'.

Cancellara last won that race in 2010, the year he won his first Tour of Flanders.