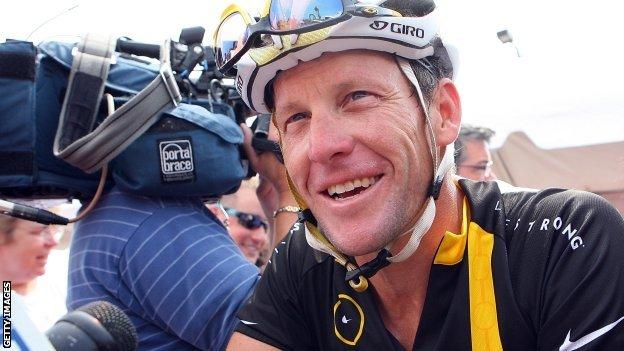 Lance Armstrong has withdrawn from the Masters South Central Zone Swimming Championships in Texas this weekend after an objection from swimming's international governing body.

The International Swimming Federation (Fina) asked US Masters Swimming not to accept the disgraced cyclist's entry.

Fina state that the event is subject to the lifetime ban given to Armstrong, 41, by the US Anti-Doping Agency.

Armstrong was set to compete in three freestyle races at the Austin event.

He had been scheduled to compete in freestyle races over 500 yards, 1,000 yards and 1,650 yards against swimmers his own age or older.

However, meeting organiser Rob Butcher said: "He doesn't want to cause any more harm to any more organisations.

"His interest was around fitness and training. In light of Fina he will not be swimming."

Armstrong was stripped of his seven Tour de France titles after deciding not to defend doping charges filed against him last August.

Armstrong was charged by the US Anti-Doping Agency (Usada) in June 2012 with using performance-enhancing drugs.

He filed a lawsuit against the organisation the following month, accusing it of "corrupt inducements" to other cyclists to testify against him.

However, Armstrong then announced he would not fight the charges and was given a life ban by Usada.

In January, he confessed to taking performance-enhancing drugs during all seven of his Tour de France wins between 1999 and 2005 in a television interview with Oprah Winfrey.