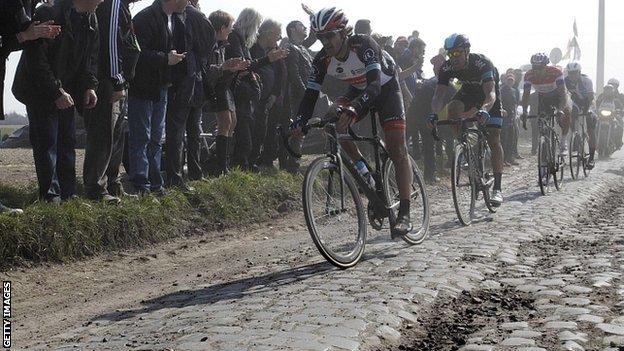 Fabian Cancellara won the Paris-Roubaix one-day race on Sunday, his third victory in the cobbled classic.

The Swiss rider, who won the event in 2006 and 2010, outsprinted Belgium's Sep Vanmarcke, while Niki Terpstra edged out Greg van Avermaet for third.

It was also his third major WorldTour victory in three weeks, having won the Tour of Flanders and the E3 Harelbeke.

British rider Geraint Thomas was involved in a crash 72km from the end.

It was the second time in two weeks the Team Sky rider's chances had been ended with a crash and he rolled past the finishing line in 79th place, more than 14 minutes behind Cancellara.

Cancellara himself collapsed to the ground after his win but recovered quickly and said: "I was in another world of riding! I still don't know how I did it.

"I was dropped and pretty far back but then I started to move up. This is a race you can never give up on until the end.

"I had to play with him [Vanmarcke] in the end because I tried to go away but he followed so then I knew it was man against man."

In the final stages, the challenges of two of the leading four riders - Belgian Stijn Vandenbergh and Czech Zdenek Stybar - ended after they clipped spectators.

Cancellara's challenge appeared to be fading with 34km to go when the 32-year-old eased off to speak to the team car.

Instead, the RadioShack rider injected a burst of intense pace to catch the leaders, making his move with a little under 24km to go, accompanied by Stybar.

Cancellara and Stybar closed on Vanmarcke and Vandenbergh through the penultimate cobbled section and four became three when Vandenbergh brushed a spectator and hit the ground.

Stybar's challenge was also finished by spectators as they crowded the trio, leaving Cancellara and Vanmarcke in a two-man race.

Vanmarcke went ahead on the final cobbled section before Cancellara pulled it back and unsuccessfully tried to break his opponent with four kilometres to go.

Cancellara slowed down as they entered the final kilometre to contest the traditional finish in the Roubaix velodrome and he emerged triumphant from a track-style sprint.

Thomas was in a breakaway group with Edvald Boasson Hagen and Taylor Phinney with 135km left but the group was chased down and Thomas then crashed on a cobbled section.

In the women's five-stage Energiewacht Tour in the Netherlands, Lizzie Armistead, riding for Boels Dolmans, finished the best of the British riders in seventh, 3:09 behind winner Ellen van Dijk.

Track specialists Laura Trott and Dani King, were a commendable 21st and 23rd in their first professional stage race for Wiggle Honda, nine minutes off the winner.