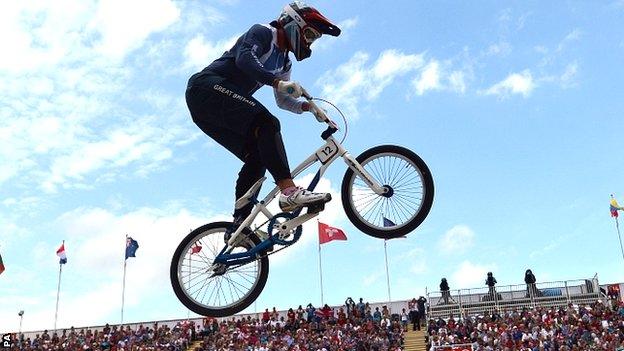 Britain's Shanaze Reade claimed victory in the first and second rounds of the UEC BMX European Series in France.

After winning round one on Saturday, Reade beat Merle Van Bentham of the Netherlands in Sunday's final to claim maximum points from the two-day event.

The next rounds are in Czech Republic on 27-28 April before the series heads to Germany, Sweden, Latvia and Belgium.

Reade is building up to the opening round of the UCI BMX Supercross in Manchester on 19-20 April.

The 24-year-old from Crewe impressed in her victory over Van Bentham, while team-mate Charlotte Green reached the quarter-finals.

In the men's event, Kyle Evans recovered from a first-corner crash in the semi-finals to finish fourth and reach the final, where he came eighth.

Fellow Briton Curtis Manaton also made the semis but a seventh place saw him miss out on a final ride.

Quillan Isidore, Britain's sole representative in the Junior competition, also made it through to the semi-finals but a pile-up on the first corner put the Olympic Development Programme rider out of contention.