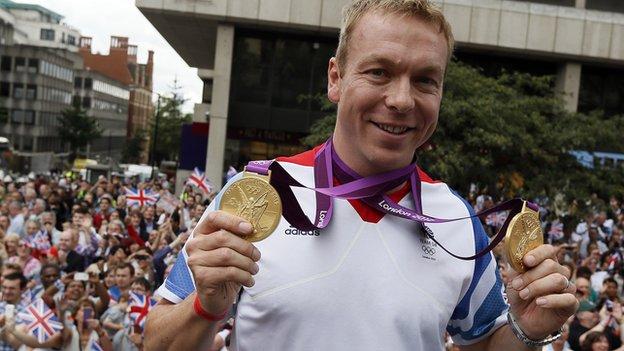 Six Olympic gold medals. An 11-time world champion. The first Briton in 100 years to win three gold medals at the same Olympics. The most successful Olympic cyclist of all time.

Perhaps the most extraordinary aspect of Sir Chris Hoy's storied career, which ended when he announced his retirement, is how preordained, how straightforward, he made all those remarkable achievements seem.

You think that there must be something wrong, that it shouldn't feel that bad, that it feels awful, that you're going to die

Hoy steps away from his sport with British cycling dominant globally on both track and increasingly road, the country in love with bikes and those lean heroes who ride them. When he made his first tentative pedal strokes, a six-year-old wannabe BMX rider taken down to his local track at Danderhall near Edinburgh after being inspired by the racing scenes in the film ET, it was anything but.

There was no glamour, no Lottery funding, little expectation and few role models.

Excuses for failure were everywhere. As detailed in Richard Moore's book Heroes, Villains and Velodromes, when Hoy was picked to represent Britain at the 1996 European Under-23 Championships, he was sent to Moscow with one set of spare wheels and a tracksuit he had to hand back on his return. At the 1998 Commonwealth Games, the Scotland squad got to keep their branded polo shirts but brought home nothing else.

Chris Boardman's mentor Peter Keen would subsequently revolutionise the set-up at British Cycling. But in the early years his focus was on the track endurance events - controllable, quantifiable - rather than the shorter, messier stuff.

Hoy was viewed by some as no more than a muscular mini-me of his fellow Scottish sprinter Craig MacLean. When the two of them, alongside Jason Queally, won team sprint silver at the 1999 World Championships and the Sydney Olympics a year later, they did so without a specialist coach.

Hoy would not be stopped. As he matured as an athlete he would dominate the kilo (one kilometre time-trial), taking gold in Athens and then, when the International Cycling Union (UCI) ditched that event from the Olympic programme, learn and master the keirin and individual sprint - at an age when physiology and precedent suggested he was wasting his time.

For all his rivals' talk of magic wheels, those successes were built on more prosaic foundations: relentless work in the weights room and frightening sessions on the velodrome boards.

That obsession with heavy metal would give him thighs with a circumference of 27 inches, each one a full four inches wider than Victoria Beckham's waist.

Neither was Hoy too posh to push. He could squat 237.5kg, more than two and a half times his own bodyweight - his thighs alone have not one but two Twitter parody accounts.

Sprint training is a cruel combination of the mundane and brutal. There are no easy days, no sessions where you can cruise or hide in the peloton.

Six days a week, Hoy would fill his legs with enough lactic acid to corrode any ordinary man's ambitions. Often alone, the stands around the Manchester track empty, he would go deep, recover, and go deeper still.

"Every time you do it, it feels like the hardest thing you've ever done," he told me after one session. "You think that there must be something wrong, that it shouldn't feel that bad, that it feels awful, that you're going to die."

It broke hearts but won battles, not only for Hoy but for those around him.

"Chris sets the standard for the rest of us," Geraint Thomas, twice Olympic champion in the team pursuit, said in the aftermath of London 2012.

"For him to carry on, hurting himself every day in the gym and in the velodrome, to commit like he has for so long, is a great example."

For Hoy it became a simple equation. "What would happen if I lost the gold by one thousandth of a second, because there was a training session I skipped or didn't give my all to?"

Long before the wider world became aware of British Cycling's mantra of marginal gains, Hoy was its thunder-thighed embodiment. When he seized the world kilo title in 2002 it was by 0.001 secs, answering his own rhetorical question in the most concise fashion.

As Dave Brailsford took over from Keen, harnessing the increased financial backing from UK Sport to create the most impressive elite environment that British sport had seen, Hoy was both a prime mover and beneficiary.

Brailsford brought together coaches who would have a huge impact on his totemic rider - German Jan van Eijden, Australian Shane Sutton, Englishman Iain Dyer - and the engineers and innovators who would form the 'Secret Squirrel Club', dedicated to hunting down every possible technological advantage.

Chris Boardman, Dimitris Katsanis and Matt Parker, Brailsford's head of marginal gains, would all play their part in Hoy's triple success in Beijing. Hoy, much like Michael Schumacher at Ferrari, was able to utilise and blend the resources of man and machine around him to optimal effect.

Never was that better illustrated than by his relationship with Steve Peters, the clinical psychiatrist brought in by the canny Brailsford to maximise his charges' mental abilities.

Hoy, at odds with his imperturbable public image, was frequently beset by self-doubt and paranoia. "I had a tremendous sense of foreboding," he admitted, "wondering about the what ifs, about crashes and mistakes."

Where others may have rejected Peters' idiosyncratic approach and analogies, Hoy embraced them, talk of angry inner chimps and all.

The man inside the helmet

As he waited to race his kilo in Athens in 2004, all three riders before him broke the Olympic record, one after another. Faced with an escalation of pressure that would have sunk many others, he simply worked through the drills Peters had given him, walked out to his bike and broke the record one more time.

The impact of it all on the country at large was as unexpected as it was extraordinary. As a cyclist - Hoy has always described himself as a "minority sportsman" - he expected to go through life in relative anonymity.

Instead, after Beijing, he became very public property. Before Christmas he had signed eight new sponsorship deals, been forced to change his mobile number three times, been feted by Prime Ministers and royalty and shaken, on average, 200 strangers' hands a day.

His signature got shorter ("It's just a 'C' and an 'H' now with a squiggle in between") but his temper seldom frayed. While his status meant he became an inadvertent spokesman on everything from Scottish independence and Lance Armstrong's doping to the refereeing decisions of his near-namesake Chris Foy, he did so with both equanimity and no discernible impact on his sporting successes - exemplifying an attitude that has seen the country fall so thoroughly for its Olympians over the past five years.

Even in London last summer there were daunting hurdles to clear - being passed over in favour of Jason Kenny for the sole spot in the individual sprint, being passed on the back straight by Germany's Maximilian Levy in the keirin final.

That he would still come away with two golds made those special days in the Stratford velodrome the perfect valediction. What started with an extra-terrestrial ended with achievements that were out of this world.