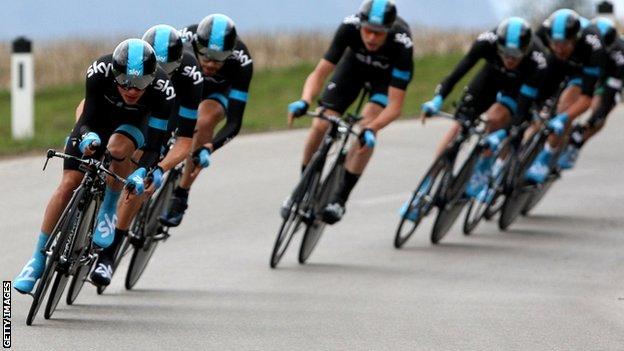 Team Sky won the time trial on day one of the Giro del Trentino in Italy as Sir Bradley Wiggins bids to become the first Briton to win the event.

The eight-man squad beat Astana by 13 seconds in the second of two stages on the opening day, after a breakaway had earlier left the big names trailing.

Wiggins and Team Sky came home in the peloton a significant six minutes and 51 seconds behind the leaders.

CCC Polsat's Josef Cerny, 19, took the overall lead at the end of day one having finished second in the opening 128.5km road stage.

Team Sky went out second in the 14.1km team time trial that began at Aguntum's Roman ruins, and set a time none of the following teams could match.

That saw Wiggins take 13 seconds out of Astana rival Vincenzo Nibali and he also leads Lampre's Michele Scarponi by 16 seconds, and Cadel Evans (BMC) and Ivan Basso (Cannondale) by 49 seconds each.

However, the Tour de France and Olympic time-trial champion has work to do if he is to close the gap on the leaders in day two's 224.8km stage, which ends with a mountain-top finish in Vetriolo Terme.

"I feel OK and confident," said Wiggins. "Tomorrow's test to Vetriolo will be really tough, but we are here to see where we can get, hopefully as high as possible."

Wiggins has chosen the four-day event in northern Italy for its similarities to his 2013 priority, the Giro d'Italia.

Overall Standings (after 2 of 5 stages)