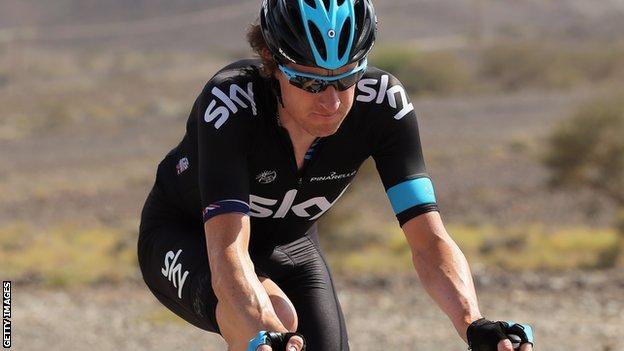 Wiggins finished third in the 224.8km stage on day two to close the gap on overall leader Maxime Bouet of Ag2r-La Mondiale to three minutes, 48 seconds.

The 30-year-old was part of a breakaway group that included Stefano Pirazzi of Bardiani Valvole and Pierre Rolland of Europcar on the approach to the final climb.

But the Team Sky rider broke away on the climb to take victory.

Wiggins crossed the line with Astana's Vincenzo Nibali, keeping the Italian, who will be one of Wiggins's main rivals for next month's Giro d'Italia, nine seconds behind him overall.

Team Sky had won Tuesday's time trial on day one, but only after Wiggins came home in the peloton six minutes and 51 seconds behind the leaders on the day's opening road stage.

"Again it's about preparation for the Giro [d'Italia] and it was a really hard climb today," said Siutsou.

"I thought maybe I could try to make an attack and see what happened.

"When I saw there was five kilometres to go and the gap of just over 30 seconds I tried to push a little bit harder, but not to go to the very maximum as I wanted to keep something for the final kilometre in case someone closed me down."

Overall standings (after day 2 of 4)