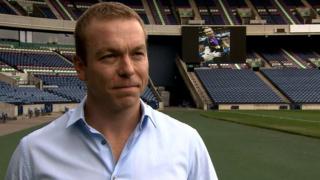 Sir Chris Hoy tells BBC sports editor David Bond that he "didn't have any more to give" after announcing his decision to retire from cycling.

The six-time Olympic champion had been expected to compete at the 2014 Commonwealth Games in Glasgow but felt "to go on for another year would be one too far".

Hoy feels that he leaves the sport in "great health" and says the future of British cycling is bright and tips Jason Kenny to take his "figurehead" mantle.