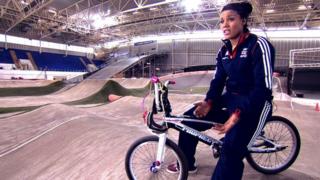 Speaking before the BMX Supercross World Cup, which begins in Manchester on Friday, Reade says she thinks the sport is on the rise in Britain - thanks in large part to its Olympic debut at Beijing in 2008.

And British cycling BMX coach Grant White says the facilities at the National BMX Centre in Manchester have given his riders a big advantage over other countries.