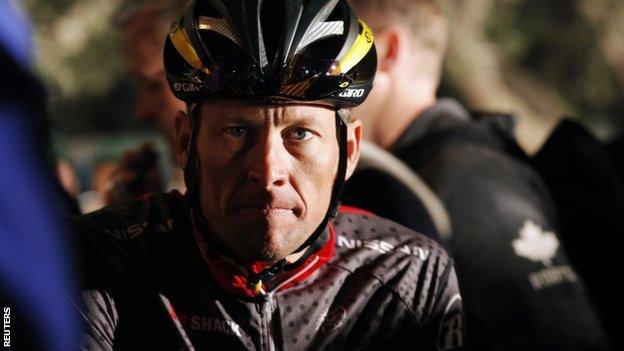 The US government is seeking more than £78m in damages after filing a lawsuit over the Lance Armstrong affair.

The banned American cyclist, 41, is accused of violating his contract with his former team and is said to have been "unjustly enriched" while cheating to win the Tour de France.

Armstrong has admitted to doping during all of his seven Tour de France wins.

Armstrong ended years of denial in January during an interview with chat show host Oprah Winfrey in which he described doping as part of the process of winning the Tour.

The US government announced in February it would join the 2010 'whistleblowing' lawsuit filed by ex-US Postal rider Floyd Landis, who himself admitted using drugs throughout his career. Tuesday was the deadline for the Justice Department to file its formal complaint.

According to the suit, the Postal Service (USPS) paid about $40m (£26.2m) to be the title sponsor of Armstrong's teams for six of his Tour de France victories. It added that Armstrong's salary during that time, excluding bonuses, was $17.9m (£11.7m).

"Defendants were unjustly enriched to the extent of the payments and other benefits they received from the USPS, either directly or indirectly," the complaint said.

The government is seeking triple losses of the sponsorship funds, which amounts to around £78m, under the federal False Claims Act. The government also asked for a jury trial.

By flagging up allegations of fraud, Landis could receive a substantial share of any money recovered.

The law, introduced by President Lincoln in 1863, stipulates the person bringing the lawsuit can receive 15-25 per cent of any damages.

"The US Postal Service benefited tremendously from its sponsorship of the cycling team," Peters said. "Its own studies repeatedly and conclusively prove this. The USPS was never the victim of fraud.

"Lance Armstrong rode his heart out for the USPS team, and gave the brand tremendous exposure during the sponsorship years."

Team director Bruyneel has been charged by USADA with doping violations but is fighting that case in arbitration.