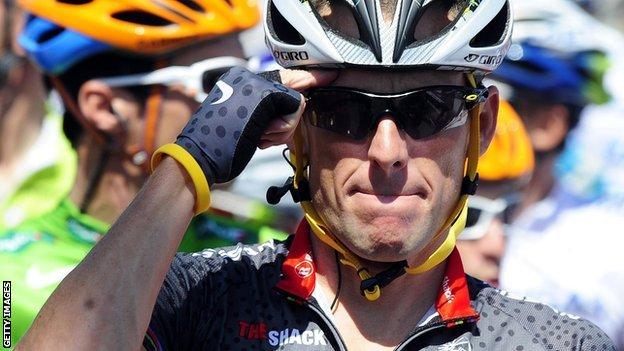 Of all the statements to emerge from the mouth of Lance Armstrong or those who represent him in recent months, Wednesday's offering from his lawyer Elliot Peters is one of the most disingenuous uttered throughout the whole, sorry affair.

Describing the United States government's long anticipated law suit against Armstrong for defrauding sponsor US Postal (USPS) as "opportunistic and insincere", Peters goes on to say: "The USPS was never the victim of fraud. Lance Armstrong rode his heart out for the USPS team, and gave the brand tremendous exposure during the sponsorship years."

True enough. But we now know that vast exposure was based on one of the biggest lies sport has ever been forced to confront.

Since Armstrong confessed all to Oprah Winfrey in January, former partners have been lining up lawsuits to retrieve some of the money they paid the American during his cycling career.

The US government said in February it would seek to join the whistleblower case brought by Armstrong's former team-mate Floyd Landis to get back some of the money the US Postal Service paid to sponsor his team.

Now they have confirmed they are seeking $17.9m which they say Armstrong "unjustly enriched" himself with between 1998 and 2004 when he won six of his seven Tour de France titles.

But the final amount could be many times that.

The case is being brought under the False Claims Act, which allows claimants to recoup three times the amount they lost. The government is also claiming breach of contract.

It's hard to know how much Armstrong is worth. Estimates in the US have ranged between $100m and $125m, although the true figure could be less.

Whatever the size of his fortune, there is no question Armstrong now faces the prospect of losing everything.

Even before the move by the American government, he was already subject to a number of potentially costly lawsuits.

At the start of March, Acceptance Insurance Company filed a claim for $3m in bonuses they paid him and his management company Tailwind Sports.

A few weeks earlier he was sued in a federal court in Los Angeles for making false claims in relation to his sponsorship by supplement manufacturer FRS.

And then there is the case brought by the Sunday Times who want him to repay the damages he was awarded after he successfully sued them for libel back in 2004. They also want their costs which could take the total bill from that case to near £1m.

No doubt Armstrong and his legal team will have weighed all this up when he made his decision to speak to Oprah earlier this year.

He may write the legal bills off as an expensive but necessary expense on his road to redemption.

We already know his desire to compete again is strong after he was denied the chance to make a comeback in a masters swimming event.

For a driven competitor like Armstrong that's the most effective way to punish him.

Because no matter how much money the US government or his former sponsors recoup, the cost to cycling and to sport's reputation has been far, far greater.