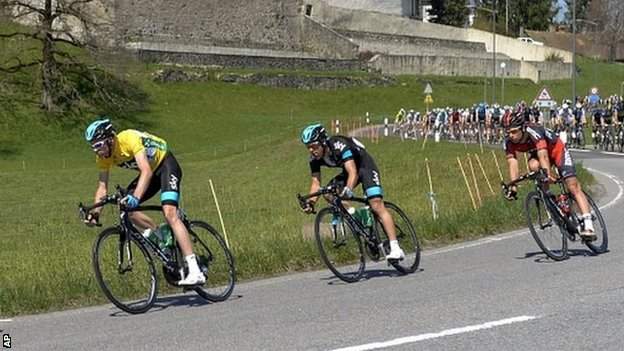 Britain's Chris Froome held on to the lead after Team Sky fended off attacks from rival teams on stage two of the Tour de Romandie in Switzerland.

Froome finished the 190.3km stage from Prilly/Ouest Lausannois to Granges in the bunch to retain his six-second lead after three days of the six-day event.

However, the first climbs of the week saw Froome and his team-mates put under pressure by other riders.

Ramunas Navardauskas of Lithuania won the stage in a sprint finish.

The Garmin rider edged out Italy's Enrico Gasparotto and Gianni Meersman of Belgium on the line.

Froome, who will lead Team Sky at this year's Tour de France, retains first place in the overall classification with American Andrew Talansky six seconds back, and Croatia's Robert Kiserlovski 13 seconds off the leader.

"It was quite a straightforward stage for me just following my team-mates," said Froome on the Team Sky website.

"They did all the work and I was able to stay on their wheel all day.

Wednesday's stage came to life on the final 7.5km climb to Plagne and Froome was left with only Richie Porte supporting him as Kiserlovski, Alejandro Valverde, Thibaut Pinot and Pierre Rolland went on the attack.