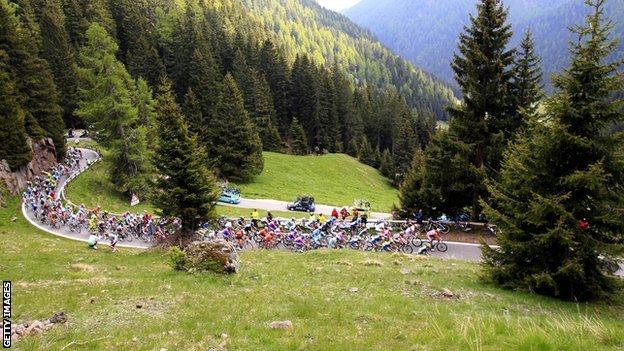 If the Tour de France is the best known and most glamorous cycling race in the world, the Giro d'Italia is its grittier and rather more brutal brother lurking in the shadows.

After a brief sojourn to Denmark for the first three stages in 2012, this year's race takes place almost exclusively in Italy - save for one brief excursion to the mighty Galibier mountain pass in France.

It is the first of Europe's three Grand Tours with the Tour de France and Vuelta a Espana following in July and August respectively.

Survival of the fittest

The 1914 edition is considered to be the most gruelling race in the event's history, with just eight of the 81 competitors managing to finish. Stage three, a 430km tour from Lucca to Roma which remains the longest in Giro history, took the stage winner Costante Girardengo 17 hours and 28 minutes to complete.

It's a firm favourite among the riders, not least because it is more relaxed than the Tour and draws loyal, passionate and knowledgeable Italian fans in their thousands to support the riders.

The 96th edition of the race begins on Saturday in Naples and finishes 21 stages and 3,405km later in Brescia on 26 May.

Organisers have been canny in adding 88.9km of time trials in an attempt to lure a world-class field which includes Bradley Wiggins, defending champion Ryder Hesjedal and Italy's Vincenzo Nibali to the event.

However, the route retains a mountainous look in the closing stages with some extraordinarily steep climbs ensuring this race remains arguably tougher to win than the Tour de France itself.

The pink jersey is most prized and is given out each day to the general classification leader - the rider who has the best aggregate time. The blue jersey is given to the best climber, with points awarded at the top of each classified climb. Similarly, the red is awarded to the rider with the most points earned at stage finishes and at intermediate sprints. The white is given to the best placed under-25 rider.

For three weeks every May, pink is the colour of choice in Italy in a nod to the road race's origins. In 1909, Italian sports newspaper La Gazzetta dello Sport - which is printed on pink paper - founded the race to build on the success of its French counterpart that had begun six years before.

It proved to be a success and, coupled with a rise in the paper's sales, the future of the race was ensured. Initially, the race was dominated by Italians, though some of that can be put down to the fact many of the world's best chose to compete in the one-day classic races of northern Europe, which clashed with the race.

But in 1950, Switzerland's Hugo Koblet became the first non-Italian to win the pink jersey - otherwise known as the maglia rosa which is handed out each day to the race leader - and since then, the balance of power has been split between home-grown talent and foreign talent.

Italian Alfredo Binda was dominant in the 1920s and 1930s, clocking up five Giro victories. That record can only be matched by countryman Fausto Coppi - who raised interest in the event through his intense rivalry with Gino Bartali in the 1940s - and Belgium's legendary rider Eddy Merckx.

The opening eight stages take place in the south of Italy - a part of the country which was rarely visited in the last edition - with predominantly flat and medium mountain stages as well as a team and individual time-trial.

The riders are given a rest day between stages nine and 10, before heading north for the first mountain stage of the race: a 167km ride from Cordenons to Altopiano del Montasio.

But it's not until the third Saturday of the tour that the lungs and legs really start to take a beating. Four huge mountain stages, including the Tre Cime di Lavaredo summit in the Alps north of Venice, and the ascent of the famous Stelvio Pass - named as Top Gear's greatest driving road in the world - lie in wait.

Even the second and final 19.4km time-trial stage, from Mori to Polsa, is uphill.

Just five British riders have ever won a stage of the Giro d'Italia - Vin Denson, David Millar, Robert Millar, Mark Cavendish and Bradley Wiggins - with 14 individual stage triumphs between them

Britain's reigning Olympic time trial and Tour de France champion Bradley Wiggins is among the favourites for the first Grand Tour of the season.

The 33-year-old says winning the Giro could be tougher than his historic French triumph last year. The Team Sky rider has competed in the event four times previously, with 40th his best finish in 2010.

But success would give him the chance of becoming the first cyclist since Marco Pantani in 1998 to win both the Giro and the Tour in the same year. It would also be the best performance from a Briton since Robert Millar finished second in 1987.

Elsewhere, sprinter Mark Cavendish is sure to create headlines as he bids to secure his first red points jersey, after missing out by a single point to Joaquim Rodriguez last year. The Manxman, who has won 10 individual stages at the Giro in the last five years, will lead the Omega Pharma Quick-Step team in this year's event.

David Millar will also ride in the race, just two days after his wife gave birth to their second child. The 36-year-old Scotsman, who has won two stages at previous Giro and wore the pink jersey for two days in 2011, races for Garmin-Sharp and he will be trying to help Ryder Hesjedal defend his title.

British time-trial champion Alex Dowsett will make his Grand Tour debut, lining up in Movistar's nine-man team. The 24-year-old raced for Britain in the 2012 World Road Championships, finishing eighth in the time trial.

Adam Blythe and Steve Cummings have also been confirmed as starters and will attempt to help BMC Racing's Cadel Evans challenge Wiggins. Blythe, 23, was fourth in the Tour of Qatar earlier this year, while 32-year-old Cummings is riding in his fourth Giro.

Wiggins's main threat in his bid to seal Giro glory will come from Italy's Vincenzo Nibali, who came third in the 2012 Tour de France - behind Team Sky duo Wiggins and Chris Froome.

The Sicilian won the recent Giro del Trentino - which is always a good indicator of form - and has shown his pedigree in this race with third in 2010 and second in 2011. If Wiggins is short of his best, Nibali will be ready to pounce.

Defending champion Ryder Hesjedal can't be counted out, having become Canada's first Grand Tour winner in 2012 despite not winning a single stage in the race.

Australia's Cadel Evans, who won the 2011 Tour de France, has proved he can climb but it is doubtful whether he is any stronger than Wiggins, while his time trialling may let him down.