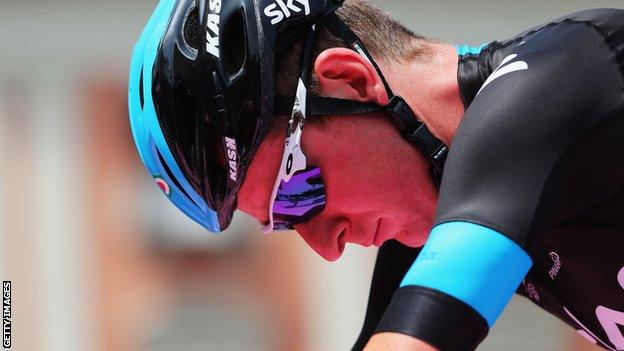 Sir Bradley Wiggins has been ruled out of defending his Tour de France title because illness and injury have left him insufficient time to train for it.

Wiggins, 33, withdrew from the Giro d'Italia with a chest infection and has also been nursing a knee problem.

He said: "I desperately wanted be there, for the team and for all the fans along the way - but it's not going to happen."

Chris Froome had already been given the nod to lead Team Sky's challenge.

Wiggins added: "I can't train the way I need to train and I'm not going to be ready. Once you accept that, it's almost a relief not having to worry about the injury and the race against time.

"I've been through this before, when I broke my collarbone [in the 2011 Tour], so I know how it works. I'll get this sorted, set new goals for this season and focus on those.

"This team has so many riders in great shape, ready for selection and we set incredible standards for performance which shouldn't be compromised. We need to have the best chance to win."

The absence of seven-time Olympic medallist Wiggins will bring an end to speculation about his battle with Froome for the team leadership in the Tour, which starts on Saturday, 29 June.

He had previously spoken of his desire to defend his title rather than play a support role for his Team Sky team-mate.

Wiggins withdrew from the Giro d'Italia on 18 May due to a worsening chest infection, and returned home for treatment, rest, and further assessment of his knee.

Team Sky doctor Richard Freeman said the chest infection had now "completely cleared up" but it had left Wiggins unable to train with any intensity.

Freeman added: "Further medical investigations on the knee injury that we were managing at the Giro showed the condition was more significant than we thought."

Team principal Sir Dave Brailsford said: "With illness, injury and treatment Brad has gone past the point where he can be ready for the Tour.

"It's a big loss but, given these circumstances, we won't consider him for selection.

"He hasn't been able to train hard since the Giro and now he needs further rest. Whilst we all know these things happen in sport, it doesn't take away from the fact that this is a huge disappointment for everyone in the team - and above all for Brad.

"It's incredibly sad to have the reigning champion at Team Sky but not lining up at the Tour. But he's a champion, a formidable athlete and will come back winning as he has before."

But British Cycling coach Shane Sutton is confident Wiggins will bounce back from his setback.

"This is a great loss to Team Sky. They will have been weakened by the loss of Wiggins massively, whether he was there to win the Tour or play a support role as Froome did for him last year," Sutton told BBC Radio 5 live.

"Team Sky will be weakened but I'm sure Froomey will be breathing a lot easier. It takes away that threat of your team-mate actually beating you, and I think he'll be really up for it now."

Australian Sutton added: "It's a tough period for him [Wiggins] right now but I'm sure he'll bounce back."