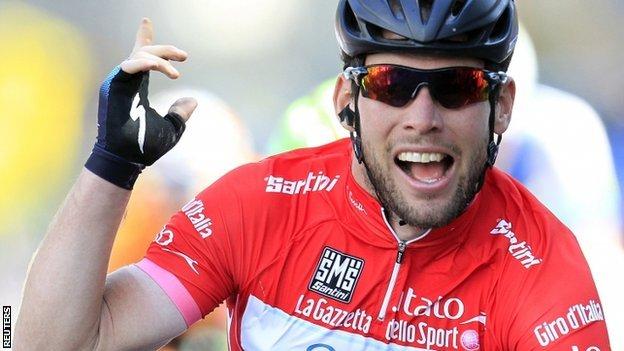 Mark Cavendish has been set the target of winning stage one of the 2013 Tour de France and wearing the race leader's yellow jersey for the first time.

The three-week race starts on Corsica on 29 June and the opening stage is expected to finish with a bunch sprint, at which the Manx rider, 28, excels.

Cavendish has won 23 Tour stages but is yet to don the fabled maillot jaune.

"One of the big goals for Mark is to go for the yellow jersey," said Rolf Aldag of his Omega Pharma-Quick Step team.

Cavendish has worn the race leaders' jerseys during the other two major three-week races - the Giro d'Italia and Vuelta a Espana - and the opening stage of the 100th edition of the Tour offers him a good chance of completing the hat-trick.

The 213km race from Porto-Vecchio to Bastia is reasonably flat, with just one small climb to negotiate early on in the stage.

In 2012, Cavendish was part of the British-based Team Sky squad that helped Sir Bradley Wiggins become the first Briton to win the Tour.

This year, the Isle of Man rider will receive the full backing of his Belgian Omega Pharma-Quick Step team in road cycling's most prestigious stage race as he attempts to win the green points jersey for a second time and emulate Djamolidine Abdoujaparov's feat of winning the Giro d'Italia and Tour points jerseys in the same year.

Cavendish won five Giro stages in May to become just the fifth rider to win the points classification on all three Grand Tours - he won the Spanish and French equivalents in 2010 and 2011 respectively.

"The team will be built mainly around Mark Cavendish," continued Aldag, who is the team's sport and development manager.

"Mark will be able to count on the same leadout of the Giro d'Italia. They are already tested in race situations and will be ready again.

"Gert Steegmans will be the last man, and Matteo Trentin will be the second to last man. But, all the team will be committed with Mark when the stage will fit his characteristics.

"Tony Martin will be there to ride to the 'Flamme Rouge' [final kilometre] on the flat stages. He will bring Matteo, Gert and Cav into the best position possible in the final kilometre.

"With seven stages set up for sprinters, a team time trial and two individual time trials, the team can be prominent in half the stages in the Tour."

Cavendish will also be looking to add to his record four successive victories on the traditional final-stage sprint down the Champs Elysees in Paris on 21 July.