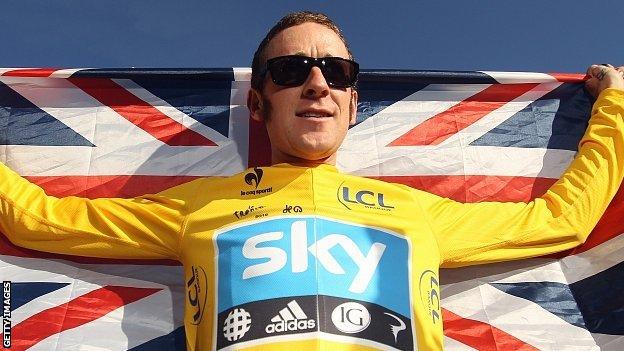 Sir Bradley Wiggins has suggested he may not ride the Tour de France again.

The 33-year-old became the first British rider to win the Tour in 2012 but injury and illness meant he was unable to defend his title.

Wiggins thinks Sky team-mate Chris Froome, who finished runner-up last year, could be the team's Tour leader for some time to come.

"For me it was always about winning the Tour," he told the Guardian. "I've done that."

But the four-time Olympic champion ruled out retirement.

"I've won the Tour - achieved that goal - but there are so many other things I've always wanted to achieve, both in and out of the sport," he added.

Word from the horse's mouth that Wiggins is unlikely to saddle up for another Grand Tour will come as a shock to many, particularly those who have been drawn to cycling by his wins and wit.

But the admission that the motivational well is running dry will not surprise those who have been following the quiet revolution at Team Sky.

Nobody should diminish what Wiggins has done, but Chris Froome is the main man now.

Likewise, nobody should be surprised if Sir Brad ends this season as world time trial champion.

He is too good to go quietly.

"I've never thought about retiring. I enjoy training, working hard, and I've still got much more left in me."

However, Wiggins has indicated that he may have taken part in his last Tour de France.

"If I'm honest I don't think I'm prepared to make those sacrifices again that I made last year, with my family and so on," he said.

While Wiggins has endured a frustrating season - he withdrew from the Giro d'Italia because of a chest infection before sustaining a knee injury - Froome, 28, has won four races.

Wiggins added: "Chris has really stepped up, he's delivered now and he looks like he's really going to be there for a few years to win a few Tours maybe.

"There has been a natural selection this year through Chris's performances and my performances that he warrants being the team leader.

"And if he wins the Tour, that continues through to next year. I can live with that.

"If I do anything else after this it will be stuff I want to do, stuff that I'm willing to train hard and sacrifice for really.

"I've always had other goals and there are other things I'd like to try and do."

Wiggins's comments suggest he is unlikely to ride in another Grand Tour - the Giro d'Italia and Vuelta a Espana, in addition to the Tour de France.

He expects to return to racing at the Tour of Poland in July before an event in Colorado, September's Tour of Britain and the world time trial championships in Italy.

Wiggins said: "When I won the time trial at the Olympics last year I thought to myself, 'I'd love to add the world title to that'.

"I'm under no illusions though, it's not going to be easy."

Of the Tour of Britain, he added: "That's a race I've always wanted to do well in. It's getting bigger every year and in terms of profile in this country it's a nice thing to do well in."