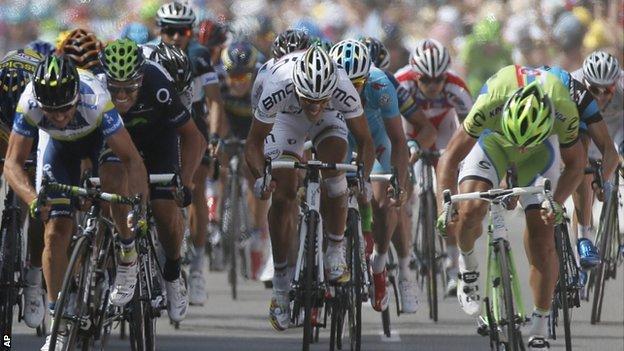 He beat Slovakia's Peter Sagan on the line in a photo finish after a hilly 145.5km ride from Ajaccio to Calvi.

Britain's Geraint Thomas, who was riding with a fractured pelvis, struggled at the back of the pack but battled to the finish line.

Thomas's compatriot and Team Sky team-mate Chris Froome finished in the peloton to remain in a large group of riders who are one second adrift of Bakelants.

Fellow Brit Mark Cavendish, from Omega Pharma-Quick-Step, confirmed he was recovering from a bout of bronchitis, after finishing the stage in 166th.

"Today I felt a little bit better than yesterday," he said. "Unfortunately last week I had to take antibiotics until this Sunday, due to bronchitis. Now I'm better, even if not 100%. We will see day by day."

"Simon Gerrans did a great job to get the stage win. It was Daryl Impey who led him out and they got it absolutely perfect. The sprint was so close. Without that team support Gerrans would not have won.

"Mark Cavendish was not around to contest the finish and he did not take the intermediate sprint that seriously earlier in the day. He has expressed an interest in the green jersey but Peter Sagan and Marcel Kittel have got a big buffer on him now in the points category which is going to take some overhauling.

"At the back of the race, Geraint Thomas rode very bravely with a fractured pelvis. Team Sky's head of business operations Fran Millar says they are going to stop telling people to 'man up' and tell them to 'gee up' instead. It's a nice little phrase and very apt.

"I'm no doctor but I don't imagine any pain can be coming from the fracture itself because, if so, you just could not ride a bike. The pain is probably coming from all the tissue around it. So with any luck, after three or four days he might start to feel better and be able to get through this race."

Gerrans' win came two days after his Orica-GreenEdge team bus got stuck under the banner at the finish line, with the riders less than 15km away. This time, things went far more smoothly for the Australian outfit, who recorded their first stage win at the Tour.

A five-man breakaway, including Gerran's team-mate Simon Clarke, escaped in the first 5km of a spectacular coastal route and stayed clear until near the top of the final climb, the Col de Marsolino, which was 10km from the finish.

Daryl Impey led Gerrans out in the home straight, and he held off Sagan to triumph by a quarter of a wheel.

There was some consolation for the Slovakian in that his second-place saw him take the green points jersey off Germany's Marcel Kittel.

"I pinpointed this stage a while ago and I am pleased I had the legs," Gerrans said. "It was like riding one of the Ardennes Classics. We spent the entire day going up or down.

"It went exactly as we planned - we wanted a guy in the breakaway to go on the offensive. In the last few days I have been leading Daryl out but we switched it around and I managed to hold off one of the fastest guys in the world.

"I could see Peter coming up on my left and it must have been close because neither of us knew who had won."

Along with Mark Cavendish, Thomas was one of the riders dropped on the final climb.

Initial examinations had failed to spot his problem but scans on Sunday night had shown the Welshman had sustained a small fracture of his pelvis when he somersaulted off his bike in a crash on Saturday.

The double Olympic track gold medallist was in pain and at the back of the field for most of the day, and he eventually finished nine minutes and 15 seconds behind Gerrans.

Kazakh rider Andrey Kashechkin of the Astana team and Frenchman Yoann Bagot of Cofidis became the first two riders to abandon this year's Tour after pulling out during stage three with digestive problems and food poisoning respectively.

The Tour now leaves Corsica to return to the French mainland for Tuesday's 25km team time trial in Nice.