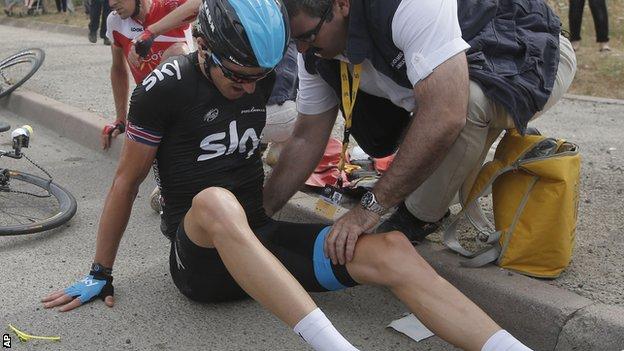 Double Olympic gold medallist Geraint Thomas is continuing riding in the Tour de France despite fracturing his pelvis in a crash in the opening stage on Saturday. Former Great Britain cyclist and BBC Sport commentator Rob Hayles struggles to imagine the "absolutely horrendous" pain the 27-year-old must be going through.

It has been difficult enough for Geraint Thomas to even get on his bike after he was injured in a big crash at the end of stage one on Saturday. I heard him say after Monday's stage that he had just had the hardest two days he has ever had on a bike.

That is really saying something if you consider the kind of efforts he has put in on the road and on the track down the years. Normally as a cyclist you get pain in your arms and legs and in your lungs - but this injury is on a completely different level.

I have had pelvic problems myself - I smashed my pelvis in three places in a car crash in 2001 - but I did not try to ride my bike immediately afterwards.

Geraint had to be lifted on to his bike on Monday because he could not get on it himself. I can only imagine the pain he is going through because, when you are pedalling your bike, all your power comes from your hips.

So, even bruising to that area is bad enough, let alone a fracture. He will be in pain just through the motion of his leg going up over the top of the pedals, and just thinking about it is absolutely horrendous.

For Geraint to have this injury so early on in the race and still want to continue is quite unbelievable. It is hard enough riding with an injury at a small race but at a Grand Tour like the Tour de France, where he is in the spotlight, it is even tougher.

He stepped off his bike at the finish line on Monday and found himself in the middle of a media scrum with people firing question after question at him.

No pain, no gain

That is an added pressure, which comes with the Tour. My main concern at first was that he was doing himself more harm than good by continuing in the race but the doctors have told him it will not get any worse.

For him now it is just about managing the pain as well as he can. He did say he was feeling better at the end of Monday's stage than he did at the start of it, and that was also better than how he felt on Sunday.

But Tuesday's time trial in Nice is going to be a big test. At 25km it is a lot shorter than a normal stage but the intensity will be a lot higher and the aero-position he will have to ride in on a time trial bike - with his pelvis pushed further forward - will put even more strain on the injury.

I don't often feel for bike riders because I know they just get on and do it but what Geraint is going through is something quite incredible.

I understand why he does not want to quit. Part of the reason is the work he has put in to get in the shape that he is, then there is the fact he is a team player.

He missed last year's Tour to focus on winning a gold medal team pursuit on the track at the Olympics and he saw what Team Sky did in France to help Sir Bradley Wiggins make history by becoming the first British winner.

Now he wants to be part of it himself by helping Chris Froome triumph, and rightly so.

What was good to see and hear on Monday was Chris being so humbled by Geraint's efforts. Froome clearly appreciated having him ride for him and sticking in there, essentially for him.

Geraint was at the back for most of the stage and was unable to contribute for the team but, around the 100km mark, he made it up to the front alongside Chris and yelled 'yeah, c'mon'. Then he got binned again to the back, but it was a great example of his spirit.

It might get to a stage where the team doctors make a decision for him and decide his race is over, just as they did with Wiggins when he had a chest infection at this year's Giro d'Italia.

But I would imagine that, having got this far, it will be Geraint's decision - unless the stopwatch makes it for him. He is not a quitter and he is used to riding on his own if he has to.

At his first Tour de France, in 2007 when he was part of the Barloworld team, he was 140th of 141 finishers, and spent an awful lot of lonely kilometres where he could easily have binned it and got in the 'broom wagon' with the other riders who have abandoned during a stage. He is not a quitter.

Geraint is not the only British rider to have struggled in the first few days of the Tour de France.

Mark Cavendish has been suffering from bronchitis and was on antibiotics until Sunday.

"At the back of the race, Geraint Thomas rode very bravely with a fractured pelvis.

"Team Sky's head of business operations Fran Millar says they are going to stop telling people to 'man up' and tell them to 'gee up' instead. It's a nice little phrase and very apt.

"I'm no doctor but I don't imagine any pain can be coming from the fracture itself because, if so, you just could not ride a bike.

"The pain is probably coming from all the tissue around it. So with any luck, after three or four days he might start to feel better and be able to get through this race."

He has clearly been below his best but I think he will be fine - the reason there has been more concern about his condition than normal at this stage of a Tour is that this year the first stage gave him an opportunity to sprint for the yellow jersey, or would have done if not for the crash where Thomas was hurt.

Historically, Cavendish takes a while to really get going in the Tour de France anyway, even if he is fully fit. He is the type of rider who pushes himself to the limit on the bike so, if he is ill, it affects his form.

In Sunday's stage, Cavendish at his best might have stayed in touch to contest a bunch sprint at the finish but in the event that did not happen anyway because Jan Bakelants stayed clear.

Cavendish already has ground to make up on Peter Sagan in the race for the green jersey in the points category but there are plenty of flat stages where he can go for the wins to make that up.

He says he is feeling better now - and he knows what to do to win stages and I would not worry too much about him. He is just picking his fights carefully at the moment and there will be a lot more to come from him later in the race.